Yet another adventure-filled episode of Bahamut where Kaiser of all people gains a companion.

I’m really enjoying this so far and I would have never expected stuff like this from a series based on a card game. I’ve said that fact a few times now but I can’t stress the fact on how much my non-existent expectations were blown away. Things can only go higher in my opinion and I hope Bahamut delivers.

Anyways, onto the episode with some spooky happenings right in the Halloween season.

Up in heaven, angels begin to quiver around due to the state of their position regarding the stolen God’s Key. One of the archangels hopes that Jeanne proves successful in her hunt for the God’s Key. Jeanne and her forces however find themselves in the middle of a rather violent sandstorm that does not seem to be caused bu natural means. With the God Key out of place, the balance between demonic and holy energies have began to shift.

On the demon side, we have our alleged fallen angel eyeing Amira and Favaro yet he refuses to take action as he was ordered to just keep on eye on them. He also mentions that someone “interesting” is near where the duo are heading. Favaro tires out from the team’s constant walking but Amira insists that they press onward. Favaro silences her as they’ll need constant supplies if they wish to even get her Helheim. Favaro pulls out one of the wanted posters and identifies their next target but also notices how much of a pain it will be to accomplish. 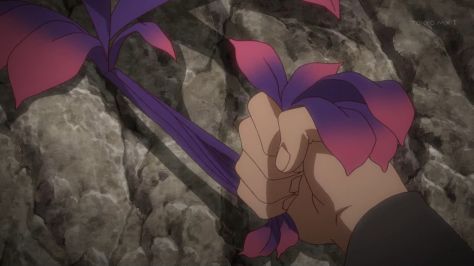 We switch over to our former-noble Kaiser on his eternal quest to end Favaro’s life. He is visibly weak and tired and ends up falling down a hill and is then discovered by a little girl who drags him back to town. We rejoin Favaro and Amira where the former climbs a cliff to obtain a purple herb. A large serpent comes out of the cliff after Favaro retrieves the plant but he is able to shoot it down. Amira asks why they’re taking a detour and Favaro explains that they will need this herb to counteract their target’s specialty, “restoration”.

Kaiser regains his senses in a humble abode of 3 were he is introduced to Rita’s family. They tend to his broken hand and offer him dinner but ask him that he helps the village fend off against the trolls that live in the forest. Kaiser accepts the duty in return for hospitality and when Rita storms out from the dinner table he decides to talk to her.

Elsewhere, Amira assists in helping Favaro make an antidote out of the herbs and she also explains her side of the story as well. She somehow was able to enter holy grounds and undid a seal to take God’s Key. She survived the encounter and obtained the key but lost a wing in the process. The key however has merged with her person and so she is considered the key.

We return to Kaiser and Rita and Kaiser tells us of his history and how he was raised in a very strict house. He would regularly leave home and mess around with the other youth and did not have the most comfortable relationship with his strict father. When his house was chosen to transport the king’s tribute, someone tipped off a group of bandits and his father was executed for his failure to protect the tribute. Kaiser’s family was struck down to the slums and his father committed suicide while he was the only one left. He tearfully tells Rita that she should cherish her family. Rita however brushes Kaiser’s history off and directs him to the toilet after he reacts to something from dinner.

Favaro and Amira enter their target’s territory and night fall approaches. The town prepares itself for a defensive line against the trolls and Kaiser puts himself in the front lines. He spots two trolls entering the town and a familiar voice calls out to him. Kaiser does not heed the voice and engages the trolls in combat but then he gets a cloth with purple stains shoved to his face. Kaiser now sees that the trolls were Favaro and Amira and to his horror, finds that he was under an illusion that the town was populated. The towns folk and Rita’s family were all undead and he joins the duo in their fight against them. Kaiser charges straight toward Rita who at that moment tries to protect the zombified abominations of her parents but she gets bit instead when she stops chanting from her spellbook. Kaiser cuts down the parents while Favaro aims for the grimoire and releases the spirit inside and captures it. Favaro apparently did his homework on the town and explains that it was destroyed by monsters around 200 years ago with the only survivor being the daughter of the local doctor. Somehow she came in contact with the spellbook and kept up with zombifying the town for 2 centuries. Favaro and Amira leaves while Kaiser laments the poor girl’s fate and prepares to end her misery after being bitten by her parents.

However it turns out that Rita was spared and somehow is sane after becoming a zombie herself. Kaiser decided to not kill her but with nowhere else left to go, she decides to follow Kaiser’s pursuit.

I felt some serious Judgement vibes from the whole fog thing going on. Enya would have been proud. While this idea is done plenty of times, the scene with Kaiser defending the town against the “trolls” also reminded me of a scenario in Dragon Age. Kaiser gets himself a not-so pleasant companion but the level of interesting potential only grows. I have to hand it Favaro, he’s a very resourceful guy compared to his looks. Preparing an antidote and going out of his way? He’s a guy with an actual brain in his head compared some others.

Can’t wait for next week. Have some Cerberus and the 3 endcard art.