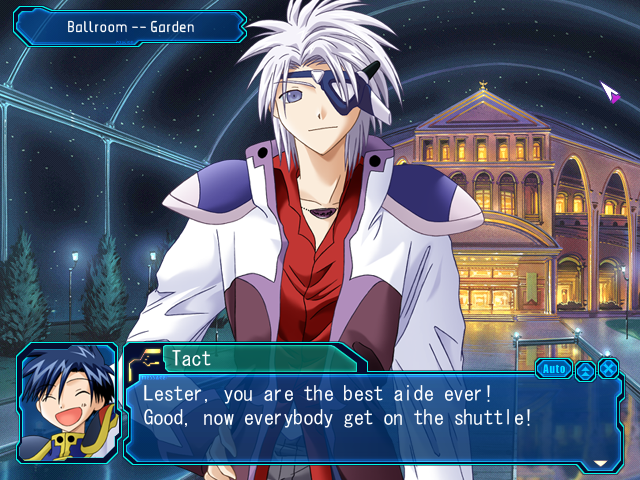 I’ll say this right now: I will NOT be consistent with the Route choices I made with in the sequel. I will be choosing a different heroine next time around.

Allow me to explain my choices here. Miflie is definitely cute but her character isn’t usually the one I go for. Ranpha’s route was already finished by me in my very first playthrough. That goes for Vanilla and Forte too. So Mint was my choice because while I didn’t like her too much before, the “ojou” air around her grew on me as I played through the game a few times.

So with Mint now officially the chosen heroine for my first-covered playthrough, let’s finally move on with the game.

Not much to say other than we go to a dress shop and just have a regular date. Well, she’s never been out much so commoner things are brand new to her. Ain’t that nice, having fun with a rich girl by doing some affordable stuff

Tact being tactless as always, arrives late to the ball due to catching up with his stack of paperwork. Everyone is already there and are dressed well for the occasion. Before the final dance however, anyone is free to request a dance and Mint gets whisked away. We can either visit everyone else or just skip to reunite with Mint. Before finally dancing and then moving on to sulking about this is how they’ll depart, the party goers feel a large quake and they head outside to see.

Eonia shows up to crash the party and nicely presents himself in front of everyone, with his legion of soldiers in tow. He requests the presence of his cousin Shiva and speak of the devil, Shiva shows up and rejects everything Eonia has to say. A shot from a gun shows that Eonia is in fact a hologram and as that truth comes to light, a bombardment of the planet begins.

Lester comes back out of nowhere and was able to get to the dance out of pure speculation and worry that some shit might go wrong. He’s already contacted the Elsior to keep in touch and everyone is able to safely get onboard.

Back on the ship, we prioritize in defending the fleeing citizen ships while being faced by those annoying high speed ships from before. The long range missile ships are also there to be a constant threat to the other ships. To make everything better, the Hell Hounds are here to preoccupy the Angel Wing (and go after the Elsior). Due to Mint’s AOE Special, the mission ended up being a lot easier than it had to be. Eonia’s forces pull back and all seems “well” but something up front seems odd.

So much for them falling back though.