And so the story of our bedazzling gang-stars comes to a close, with a dual ending I assume most anime-only watchers wouldn’t have expected. It also would have been way too easy if I titled this post a Golden Experience so I had to resist.

Notice: I wrote 99% of this review two weeks ago and now just finished watching the last episode so watch out for some addition to the post since some last minute things were addressed.

Part 5 is one of the unfortunate victims of the old days of fan-transations. Recall the unintentional comedy gold Part 4’s manga received with the duwang translations. Despite being nowhere near as comedic as those, Part 5 suffered from awkward translations with decent quality scans that I remember reading back in the day, the most particular example being the finale of the the Mista vs. Ghihaccio fight where the awkward translations kept using the word “Consciousness” instead of “resolve” and there have been many translations of Giorno’s line equating Mista’s resolve to the rising sun that I particularly liked each interpretations of. Anyway, those days are over now that a proper translation group has released high quality scans with good translations and now an anime exists with proper subbing.

But speaking of manga panel quality and translation quality, that doesn’t really matter when the visuals accompanying them are hard to interpret and the incredibly insane action of Part 5’s intense fight scenes, especially towards the end, made it difficult to discern what exactly was going on. King Crimson was incredibly guilty of this since Araki was probably figuring out shit as he drew  and the repeated instances of trying to explain how time skipped was confusing as shit, especially with the bad translations. Thankfully, the anime’s full adaptation has clarified most of those troubles of the past by giving us clearer visuals on how King Crimson actually works and more beyond that singular element. If you haven’t already noticed how everyone is a slim, Italian fashion magazine cover star, then I’ll tell you right now that the relatively effeminate aspects of Jojo don’t end here, since we’re now ready to move on to the primarily female part of Jojo with Jolyne and co. while also getting characters named after fashion labels.

The benefit of hindsight has helped David Pro enhance the series in many ways. Part 3 added smaller details of showing off Vanilla Ice, Enya, and Pet Shop early in DIO flashbacks while Part 4 added the extra scenes with Kira’s murders that helped clue us in of his existence before he showed up halfway through the actual part. Part 5 had the chance to expand on the character backstories slightly further and also give the Hitman Squad way more screentime as well as shaping up the orders of the character backgrounds in the main cast. In regards to that, I noticed significantly less hiccups in the visuals that tend to plague the latter end of production for post-Part 3 Jojo as Part 3 had a break between its arcs to shore up on visuals while Parts 4 and 5 went on continuously. Perhaps it’s because Part 5 had a lot of break weeks that helped keep the consistent quality. Definitely a lot more shots I remember being adapted properly than some of the disappointing manga panel to animation transitions in Part 4, namely the fullshot of Josuke on the motorcycle in the Highway Star fight and Kira’s casual murder of the guy who badmouthed him on the train. I will say this about the gangstar dance, it’s neat what they did but I would have been completely fine with the simple 4 panel dance.

I had my doubts about some of the voice talent going into the work being not as perfect as the All Star Battle lines but I have come around to most of them. For the record, Sugiyama’s ARI ARI ARI barrage was superior, Sanpei Yuko’s Narancia was superior to Deku, and I still prefer Akabane Kenji’s Mista to Toriumi’s but I am a fan of both, I just like Akabane’s aggressive voice more than Toriumi’s laid-back one. I have a specific soft-spot for Hisafumi Oda’s Fugo so I’ll always go with him on this one. Abbacchio as Junichi Suwabe was certainly an upgrade so I don’t have too many complaints since he sounds so similar to Kusunoki’s two lines in ASB. Lastly, Diavolo being KONISHI KATSUYUKI was mind-blowing and stands on par with Morikawa’s performance, perhaps even better, I think the latter does really angry lines better. 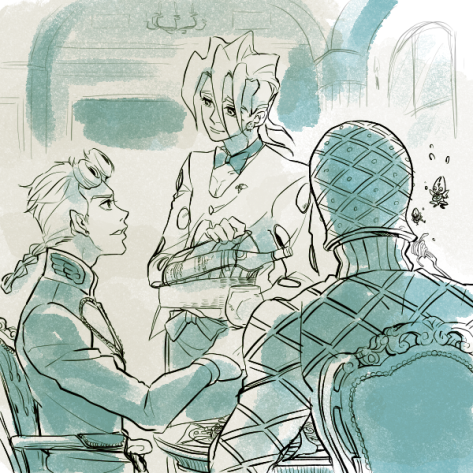 I’m basically 99% on board with all the new additions the series was given except for the one I made it a point to call out. I frankly did not like Fugo’s backstory involving his pedophile instructor and making him the one with the notable anger streak lash out in justified response instead of you know, an actual break in his demeanor and lashing out in a relatively less unjustified manner. But, you could say Purple Haze Feedback isn’t canon but hey, I definitely prefer that interpretation more since it adds to his character significantly more than just acting in self-defense. Otherwise, everything else was stellar.

Speaking of stellar, the music for this part was really something. All of the musical aspects of previous Jojo’s all had standout tracks but with each part, they kept upping the ante with even better track listings. Part 1 Decisive Battle- Overlapping Destinies, Part 2 had gems like Avalon, Overdrive, Burning Colosseum, Propaganda, and that one Italian song Caesar died to that I don’t feel like typing out. Part 3 than really kicked in with the “song that plays when the main character is beating you” trend with Stand battle conclusions and of course, Stardust Crusader’s sick riffs and powerful horns can’t be forgotten but I always had a soft spot for Kakyoin’s Noble Pope theme.  Part 4 busts in with Josuke’s BREAKDOWN BREAKDOWN theme taking motifs from Jotaro while nobody can forget the absolutely chilling themes of Kira’s perfectly normal life chopping womens’ hands off. Building off of what was already being worked off of Jotaro’s theme, Il Vento d’oro blew people’s socks off by the end of Episode 5 when Abbacchio’s stand call and the theme’s piano kicked in. That ending transition almost rivals Zeppeli’s death in episode 6 but since the ending theme for Part 5’s first half is rather…sexy, Roundabout still wins in the so cool to transition into category. Other themes such as Diavolo’s haunting theme as well as the singular showcase of Purple Haze’s utterly horrifying theme gave that much more life to something already so showy and gaudy as Part 5.

With how much works goes into making the openings and the episode itself, it doesn’t surprise me now that I realize how all Jojo endings are just slideshows with very few moving parts. Parts 1-2 had us moving left and then up a decorated stone pillar depicting the mask and the characters overlaid on top, Part 3 was a dizzying array of visuals along with a scenery changing show with its second ending while Part 4 kept constant with its showcase of Morioh and its denizens. Part 5’s endings are probably the simplest slideshow endings in the series but ohohohooo damn, I never expected this. Even right now I cannot believe Freek’n You is the ending tune that actually has the words “Wake up feeling so horny” on national Japanese television. I could not believe my fucking ears when I first heard it but I love it so much, it’s such a smooth song that has so little to do with the series aside from the singers involved are named Jojo and KC so yeah. The visuals get amped up a bit with some vines and stone mural style visuals like it did with Parts 1-2 and it gets simpler in this aspect with the Modern Crusaders ending, which is probably the least interested ending song for the series.

Fighting Gold is the superior opening in my opinion, not only are the visuals stunning and the song itself mesmerizing with Coda’s voice, I found that Traitor’s Requiem was mostly just a reproduction of scenes from the anime itself instead of something unique on its own. Of course, the few original scenes it does have were my favorite bits with everyone doing their stand rushes and falling down from the sky while Doppio completes his transformation into Diavolo. The last half isn’t all too great either, it’s just Giorno obtaining the arrow which is probably the most blatant ending fight showcase in an opening, moreso than Cars in Bloody Stream. The all-important time-gimmick in the opening during the last arc had King Crimson see through time and act on his own but I feel like this was the weakest out of all the time gimmicks in the opening thus far. I was expecting various skips throughout the opening which is why I thought there were so many scenes of padded out scenes from previous fights but I guess it was cool seeing that Diavolo sees. And upon watching the final episodes, I was completely blown away at how the last sequence was done and how I didn’t even think about Requiem reversing KC’s abilities, how did I not see this coming? 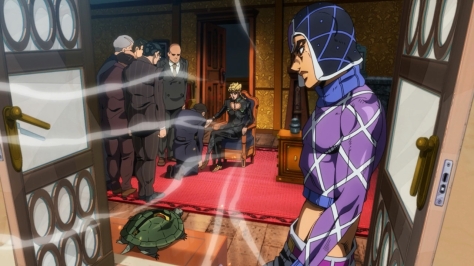 All things considered, Part 5 was of stellar quality that goes beyond just your 1:1 manga adaptations by adding so much more what the part needed to be more comprehensive and less like Part 3 with its inconsequential stand fight of the week format by adding more layers to the Hitman Squad for the first half.  Aside from the one hang-up I have with Fugo’s past and the rather lackluster opening and endings in the second half, Part 5 is still an incredible experience that was well worth the wait after Part 4.

Now just wait until every random nobody on twitter starts counting prime numbers, talk about reaching HEAVEN, “do you believe in gravity”, and repeat the 14 words of heaven when Part 6 drops.

2 thoughts on “Jojo’s Bizarre Adventure Part 5- Vento Aureo: Going Above and Beyond”