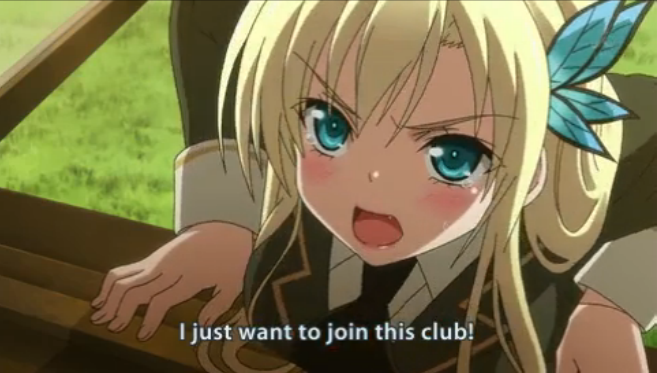 The opening, was sooo awesome.

Well out of my 5 (including this one) seasonal-episodic reviews, I regretted Hidan no Aria and IDOLM@STER to some extent, while thoroughly enjoying Kore wa Zombie and Angel Beats, well the first episode of Boku ha Tomodachi, left me hanging for more and i really, really want to see more of it…

So! Lets get on with this review of the first episode!

It’s a regular school day for this (Christian) school, students run around, playing games, talking, an average day.  One lone figure sits alone on the table in the library, reading a small book.  He leaves the library to retrieve his gym uniform, two students pass by him, without even looking at them, he scares them 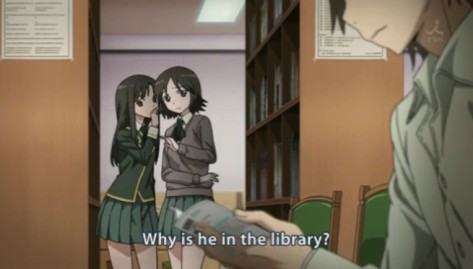 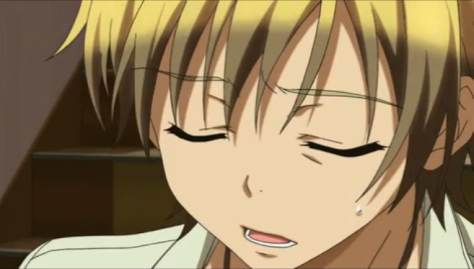 Say hello to Kodaka, your new male lead who you wish you were as he gets smothered with girls without even trying

Kick the opening theme, too bad I’m so lazy (and incompetent) to put it up

As Kodaka approaches his classroom, he finds an unexpected event 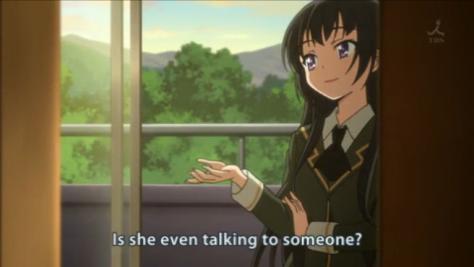 Oh look, it’s the girl in his class who never smiles or talks, smiling and talking to someon-thing

Kodaka tries to make sense out of this and just decides to head in, aaand que the Metal Gear Solid “!” sound

Enter Mikazuki Yozora, our star tsundere in BTS (yeah, imma call it that now), she apparently has a quote on quote, Air Friend (sorta like an air guitar).  In order to save time, and this site’s capacity in data, I’ll make this section quick.  The two get into a little discussion on making friends.  Yozora doesn’t really WANT to have friends but she doesn’t want to be called that girl without any friends.  On Kodaka’s side, he (obviously) has blonde hair which makse him look “yankee” which causes people to be a delinquint (come on, asian boys with blonde hair? thats creepy even for me [who is also asian]).  Yozora then suggests the idea of paying people to be friends (which admittely would be a great way to lose/gain money).  They also get in the topic of clubs.  After spending half the highschool’s 4 years with not being in a club, all the club’s members are now acquainted with eachother, which would leave newcomers who attented the school, to be left out.  The mentioning of the word, “club” lights something in Yozora’s mind and she immediately heads outside, then she gives off a smile and leaves.

After bidding a strange farewell, we skip ahead..actually we rewind to a few months ago when Kodaka was on his way to his current school.  He practices how to approach people correctly (mostly by clearing up any immediate rumors from his hair).  However, as good as his intent to make friends, he gets on the wrong bus and ends up late.

The result? Making himself look tired and utterly menacing

So after scaring both the students and the (cute) teacher his awkward life of a hapless male lead begins.  We come back to current day as Kodaka cooks dinner.  You can also see his sister whose like a mini-Kuroneko from Oreimo, only without the tsun and more of the dere.

After his tragic story, we skip to the next day, were Yozora confronts him in class and leads him outside to unveil her plans of making a brand new club.  She reveals the “Neighbor’s Club” a club made completely for the sake of making friends.  After explaining an ambigous picture we move on to them talking about their new-club and strange references made in their flyer.  Nevertheless, the two get a tiny-bit closer (they start calling eachother by their first names) and after putting up flyers, they go to their clubroom (which isn’t half bad)

As they discuss club activities, they are suprised to hear a knocking on their door. 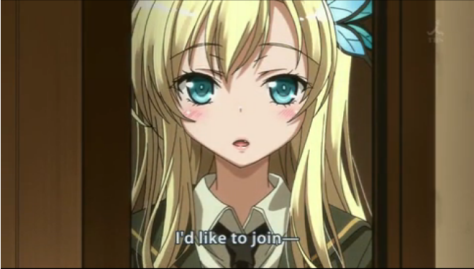 Yozora shuts the door (IN HER FAAACE), Yozora and Kodaka get into a small fit and he opens the door again.  But Yozora once again shuts her down.  Apparently, the girl she’s rejecting is the daughter of the  has top grades, and top athletics, nice hair, and a great rack, all of which Yozora despises (probably because she lacks all of them)

Enter (actually no, get out, HANDS OFF, SHE’S MINE, RAWR) Kashiwazaki Sena, the most popular (and hot) girl in school.  Being the daughter of the board chairmen (i think, but her dad is pretty high up) she has a legion of boys worshipping her (instead of God) and treat her like a princess.  Due to her being so popular, she’s alienated by the rest of the girls which leads her to have absolutely no friends.

Other than that, Yozora and Sena argue with eachother (first on breast sizes), and as the argument continues, Kodaka leaves, and looks upon the school’s chapel, and leaves.

Man, its been a while since I reviewed like this.