The Sports Competition Festival comes to its formal conclusion and while one character finds himself a starting point to greater heights, one other falls into the pits of despair as the brother he looked up to as an inspirational hero becomes hospitalized. While we’ve got just a bit before we move into our spotlight character Stain, Iida’s brief path of vengeance will soon come to light as we’ll see in the next episode where everyone chooses their Hero Names.

Bakugo meets Todoroki before their match and the former gets angered at how despondent and confused Todoroki looks. Seeking self-satisfaction by taking first place ranking higher in Bakugo’s priorities than only winning, Bakugo demands that Todoroki gives it his all and use his fire half in their upcoming fight. Soon, the two meet each other in the dueling arena and the finals begin. Todoroki immediately begins with an enormous Ice Path which Bakugo soon pierces through with his explosive advance and Todoroki saves himself from being thrown off the stage and the internal struggle within himself rages on. As Bakugo closes in on him and grabs Todoroki’s left arm, fire begins to melt the ice on his right half. Endeavor shouts for his son to utilize his other half but Todoroki hesitates and stands down as Bakugo throws an enormous explosion after expecting his opponent’s retaliation. Smoke fills the arena and Todoroki is seen out of bounds and Bakugo is announced the winner. Enraged at the simple victory, Bakugo rushes toward Todoroki’s unconscious body and demands to know why he didn’t fight him seriously but he is pacified by Midnight’s quirk.

The awards ceremony begins and Tokoyami takes the 3rd place spot after Iida had to excuse himself early due to family matters. All Might arrives to award the kids their medals and speaks words of encouragement to Tokoyami and Todoroki while he’s amazed at how Bakugo has been restrained to a pole to accept his 1st place position. Regular school life returns to the kids of Class 1A, all except for Iida who rushes toward the hospital and finds his brother immensely injured and barely able to talk as he apologizes for letting the family down after being thoroughly defeated by a malicious villain. 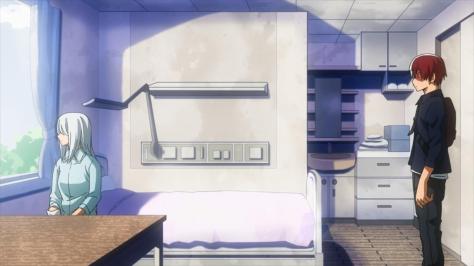 While Iida grieves for his brother, the episode showcases Todoroki’s newfound growth, his 1st true step into becoming the hero he wants to be as he leaves the house to visit his mother. While his sister asks why he’s visiting her now of all times, Todoroki doesn’t even bother answering her. Todoroki arrives in front of the hospital room to confront his mother and while he hesitates for a bit, decides to enter and make peace with the issues he has with his family and begin anew.