Will the Love Triangle Wars with 4th wheel Ida make a mark on this week’s episode? Deciding to only move with the plot that involves Mui’s brother, our protagonists win over their sensei’s to go after Mui’s brother.

At least they decided to stop with the love triangles right?

So apparently, the crew is able to convince their sensei into letting them finally going after Mui’s brother. Accompanying them is a bunch of kids who don’t seem related to the crew at all, but I guess missions like this make for good practice. Apparently, the two students were captured for this purpose and the two sides (Academy vs Trailers) make a hostage return. The two memory wiped kids are sent back and Mui’s brother is given to the students to suppress and restore. Suffice to say, the regular kids fail horribly and Takeshi, Ida, and Mui go after him.

On the other side of the map, Dai Sensei fights her own fight against the dude with the glasses from before. While she definitely seems powerful, we get some more foreshadowing of events to come. Long story short, she gets her ass kicked.

Returning to the fight at hand, Mui’s brother sets up an extremely large tower of ice and the trio scale it to reach her brother. Ida and Takeshi and detained because of ignorance. However, it only takes one shot from Mui’s special bullet to put him down. Turns out that Dai Sensei (real name Momoka before I confuse anyone) is alive and Mui’s brother finally returns. All is happy until we shift scenes to the other side with the baddies and we apparently have a new, brooding recruit.

I’m honestly thinking of dropping this but I really want to see how this turns out. Plus, reviewing something bad is always fun. 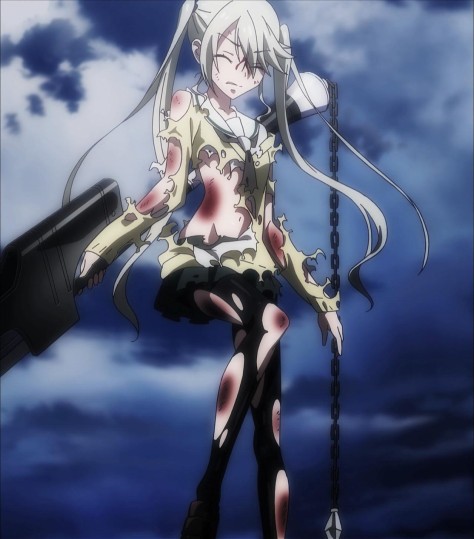 4 thoughts on “Mahou Sensou Episode 6: More Rushed than this Post”