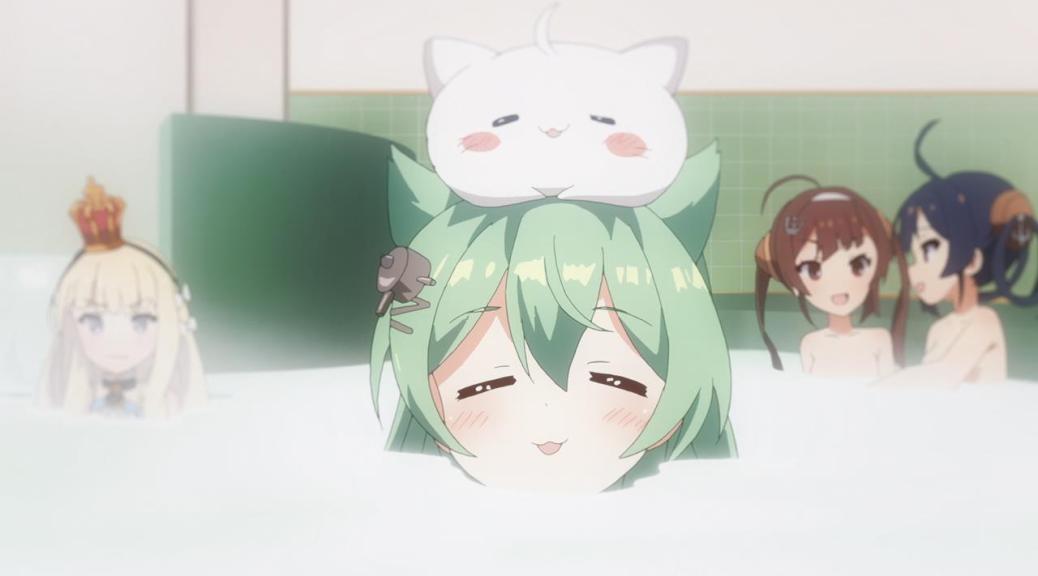 You hate to see this type of thing happen.

So if I heard right, next week’s episode is going to be a recap episode that won’t take up a proper episode slot. So Episode 7 will go up in two weeks. First off, that’s a bit worrying that a 12 episode series needs a week break for a recap episode but after this week’s episode, it might be the sad truth that producers really need it.

I half-joked about how we’d get a bathhouse episode after the beach episode because of the nature of this series and lo and behold, it actually happened. The episode also boasts the most amount of cameos by a large margin since it decided to show off both bases idling around. The aforementioned bathouse scene also feature a ton of characters that we haven’t seen before too so the ambition is appreciated. What holds all of this praise back though is that the visual quality of this episode was probably the lowest the series has gotten, which is a bit sad considering that it wasn’t too long ago since the Sakura base episode. Things swing from looking as good as usual then into some choppy faces with awkward expressions and facial structure and I probably don’t need to waste more words than point out obvious flaws in this week’s visuals. A damn shame too because some of the girls I’ve wanted to see showed up, only for them to look off. If there’s something more heinous than bad looking action, it’s bad looking fanservice.

Going beyond the poor quality, the beam of light is back to more or less make scenes even more awkward to look at given the already low quality visuals. I think I wouldn’t have minded said steam if the girls actually looked decent and I can already assume that this stunt is a Bluray pitch. Surprisingly enough, there seems to be decent support for said BDs and if that’s the case, I can only hope that it looks better because that’s the primary draw for the series. I’m still floored by how popular Enterprise is.

Enterprise herself remains as steadfast as ever, not even once touching a fanservice scene aside from all the angles she decides to be sleeping in. She keeps better watch of her health and actually leaves her room so Belfast’s assistance is clearly helping her out and giving more insight on how to better approach the goal she still has, only without needlessly endangering herself. The black cube finally showing up to be examined by the proper channels, even if PoW is still useless, and wouldn’t you know it, Enterprise touches it and sees Code G on the other side. Whether or not this hard confirms my suspicions is still not confirmed but at least they acknowledged it. Akagi herself gets a little scene at the end directly mentioning Amagi which only now reminds me how similar Enterprise and Akagi are like, fighting for the sake of their old sisters. Big difference being that Akagi is willing to work with her enemies to bring Amagi back, presumably, while Enterprise fights to make sure no one suffers like she will.

The episode wasn’t the worst, as in, it’s not the end of the world but it definitely has the most flaws. Bad looking fanservice leaves a bad taste in EVERYONE’s mouths. A point which I forgot to mention is how much more of the base is shown off. Literal lecture halls, Akashi’s new shop selling all those skill books, the dorm/canteen, it’s all pretty neat to see come to life, oh, and the Teir 5 techbox Akashi carried the cube in.