Not only do we get trains but we also now get Dead Apostles in the form of a forest that pops up wherever it wants.

We got even more fights but sadly taking place outside of the train, boo. Black Keys are always fun to watch though and boy does the thirsty pink girl get on my nerves.

Olga explains Servants and Classes and reach a conclusion that Hephaestion must have a master if she is a servant and that her willingness to reveal her name still doesn’t reveal her class. The problems escalate as the train tracks ahead become derailed and head into a rather dangerous area. The tracks now lead to the Forest of Ainnash, a freaking DEAD APOSTLE who takes form of a phantasmal forest that appears every couple hundred years in random areas. Olga looks outside the window to see some mages try to incinerate the immediate area to safeguard the train but they all are helplessly slaughtered by the trees. Olga sets up a barrier around her room as the train conductor announces for everyone to fend for themselves.

Elsewhere, Kairi and Luvia consult an acquaintance of the former running a cooking program who they consult about the decapitated corpse Reines informed of them from the auction train. Jean Mario Supinerra, Kairi’s contact, discusses with them over dinner about a similar incident in the past and reveals that someone contacted him about learning of said incident and it turns out that Trisha, Olga’s aide, was the one who asked him of it. 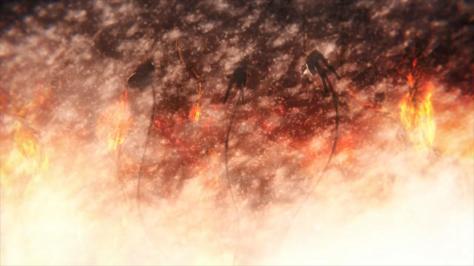 A bloody hand drags itself across the window in Olga’s room and Melvin reveals himself after he apparently was watching the train overhead from a helicopter before a tree made him crash. Frampton and Yvette show up at their door and the conductor explains that the auction will be canceled if the train doesn’t get to safety and the crew decide to put matters on their own hands. They group up and set out to find the leylines to weaken the forest’s grip on the train and Melvin unveils his abilities as a tuner, who can enhance other’s magic abilities. Framtpon, Melvin, Grya, and Yvette head out to purge the leylines and they use Yvette’s mystic eyes to locate them while Frampton is able to seal them away. Gray stays behind while the others move on to fight off Hephaestion. Gray manages to keep up but as the trio finish up their work, the leylines begin destabilize which prompts Hephaestion to retreat. Gray however wishes to continue fighting to deal with her once and for all. Back on the train, Olga undoes a spell where she accidentally finds where Trisha’s decapitated head is before the true culprit reveals herself.