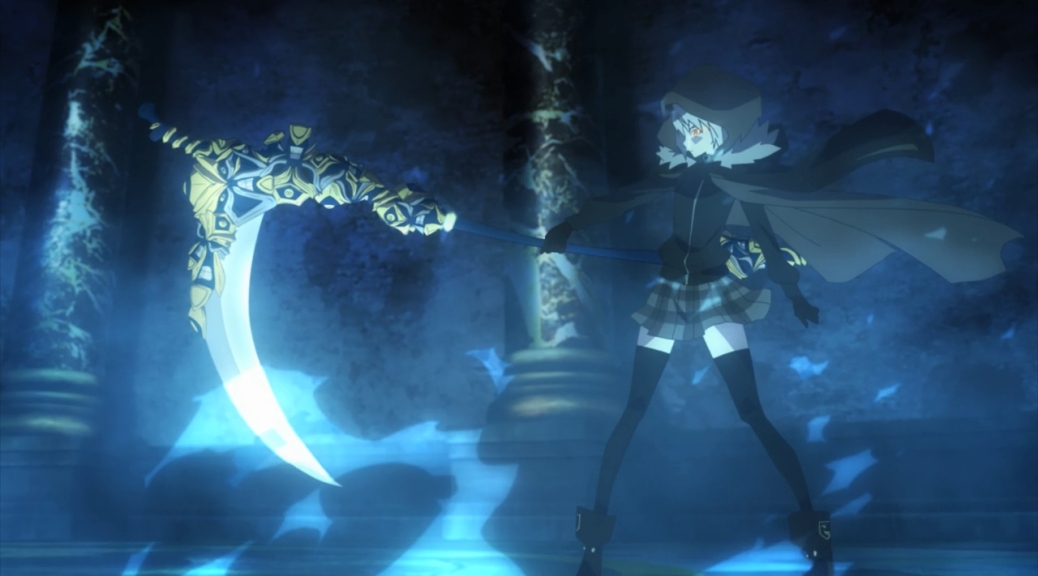 Took me long enough to write this up. Got busy with the start of August and actually waiting for Jojo to end that I nearly forgot about this. Wasn’t until my brother urged to watch this together that I finally got off my ass to get down with this.

But hey, as it turns out, it worked out after all slacking around because we didn’t even get to investigating the Rail Zeppelin yet. This also turned out to be less of a review and more just a quick overview.

I had watched Episode 0 out of curiosity and while enjoyable, I did hate Flat’s snark since I’m the exact sort of person who can’t stand having that personality be near me without getting headaches. However, the prospect of seeing a series in the Fate universe that doesn’t rely on servants to convey a story is exciting since the aforementioned Apocrypha and Last Encore were iffy at best. The politics of the Fate world at large goes beyond Holy Grail Wars and a constant theme is that of the many magi and the associated politics of large groups, the most prolific being the mages of the Clock Tower. As anyone who watched Fate Zero and/or played FGO would know, Waver returns from the 4th Holy Grail War and is given the responsibilities of taking over the class that his late instructor Kayneth left behind. The series begins with the exact circumstances that led to this predicament where the void left by Kayneth’s death puts the Archibald family behind in all of the politics and dealings in the world. The current inheritor of the El Melloi title, Reines, forces Waver to take the mantle of El Melloi until she becomes of age while also placing all the family debts on his head as well. Waver, being the helplessly responsible man he is, accepts.

The first episode deals with the circumstances of his participation in the Holy Grail War as well as the aftermath, introducing one of his friends, Melvin, that funded both his trip to Japan for the war, as well as the money to fund the re institution of the Kayneth’s class. From there, the anime skips around as people have pointed out that Rail Zeppelin is the 3rd story arc in the novels, the anime alludes to this not only in the title but also in episode 2 or 3 that has Gray asking Waver about the Iselma tower, the story taking place before Rail Zeppelin. The continuing episodes, all the way to Episode 6 are all anime original, which gives a ton of opportunities to tie in other Fate series material into the picture. We got the half of the best duo in Apocrypha, Kairi, Luvia makes frequent appearances, even the FGO centric characters like Goldorf and the Animusphere family appear.

It’s not until the conclusion of Episode 5 that prompts Waver to investigate the titular Rail Zeppelin while also doubling as an explanation to anyone not aware already that Gray is related to the whole shtick of Arturia Pendragon and her lance, Rhongomyniad due the circumstances of her birth. It’s not completely explored but her deal isn’t completely left in the dark either, which is important because she’s Waver’s most consistent companion. Episode 6 provides one more original episode involving Gray, Reines, and Luvia in the mall and more general cute things before we move on to the real adaptation.

So far, it’s mostly been individual cases and smaller things leading up to Rail Zeppelin so I hope I won’t miss out on the proper thing and I was incredibly lucky that the first six weeks of this series was not as important as I thought.