I’m also remembering the existence of the Rolling Stones arc and with it so prominently shown in the first opening, the new ending, and how David Pro wouldn’t ignore something like this. I’m not sure if there are episodes to spare but it would only take around 1 episode.

It turns out that Doppio was indeed the one inhabiting Buccellat’s body and he passes away from his gun wounds while the regular crew try and figure out a way to obtain the arrow from the mysterious yet aggressive defense mechanisms from the berserk Chariot Requiem. As it rushes towards Polnareff, it switches targets to Mista whose revolver breaks before it can fire and he’s forced to pull out a pistol he grabbed from the police officer from before. Requiem tanks the shots and continues his pursuit and Mista gets on top of a light pole with Polnareff-Turtle in hand to avoid the stand. However, the stand once again switches targets and walks away slowly. Polnareff cracks the code on what Requiem’s abilities are as the people and himself are physically starting to change into other creatures, which will soon kill off what’s left of Polnareff and anyone else for that matter to begin with. 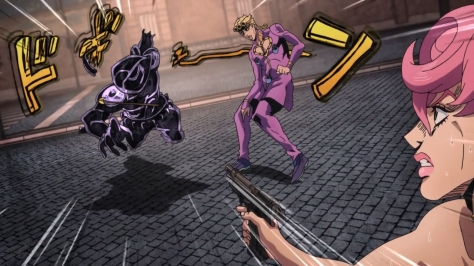 A strange perspective change occurs where Diavolo’s thoughts are heard from someone’s vision close to the crew, where Diavolo thinks to himself that he’s thankful for seeing Requiem’s abilities first as he concocts a plan to retrieve the arrow.  Giorno holds the crew up to investigate the broken revolver Mista had and sees that it was broken intentionally. Giorno uses Polnareff’s previous conclusion of Diavolo’s psyche and deduces that Diavolo actually inhabited one of their bodies to act and kill Narancia and subsequently remain close by among them. Giorno decides to test this out and cuts himself to let some blood drip on the ground to mimic Polnareff’s technique against Diavolo and approaches Mista, with the latter getting incredibly defensive about the idea. Buccellati instead offers to go first on this test. King Crimson appears from Mista’s position it turns out that it was Trish’s mind in Mista’s actual body that was housing Diavolo and he quickly takes control of Mista’s body to run towards Requiem while the others give chase.

Diavolo figures out the true weakness of Chariot Requiem by the movement of its shadows and how attacking it meant attacking oneself. Therefore, the light that produces that shadow in which Chariot uses to attack those who would attack it comes from each individual’s light and Diavolo smashes his own light behind his head to deactivate Requiem and retrieve the Arrow. However, Giorno had gotten some remnants of his chopped off arm to be on the arrow itself and uses it to buy some time, moving it away from Diavolo as the others reach him. Diavolo thinks one step ahead to nullify Gold Experience and Sex Pistols attempts to stop him but it is Trish who sends the arrow flying away in a different direction in one last act of defiance. But Diavolo punches through Trish’s stomach and sends the body flying towards the arrow too and himself in the process.