I can probably see people being extremely confused as to what this episode covered.

I don’t remember the instant muscle gain but as I’ve said before, the latter half of Vento Aureo is something that I haven’t reread in a long time. Seems that we’ll stick this particular encounter within 1 or 2 more episodes before the next set of fights move us into the final arc. Risotto Nero finally shows up and I can only expect some minor level of preferential treatment before we fully move on.

We are given the history of a man named Vinegar Doppio, born from mysterious circumstance within the walls of a prison. His mother, an inmate, gave birth to him inside the compound, somehow while she wasn’t really pregnant prior to being sentenced. The child was taken to a priest in the woman’s hometown of Sardinia where he was raised by in a church and grew up to be a strange and timid man. One day he meets a woman and we see that this is actually the person who’d become the boss of Passione, as he befriends a woman and takes her out for a day of photoshooting. The priest witnesses this and plans to give his “son” a car and goes to remodel their home to make a garage but as he digs through the floors, he finds Doppio’s mother beneath the floorboards still alive. The next day, the church and the homes surrounding it go up in flames with Doppio disappearing and being presumed dead. 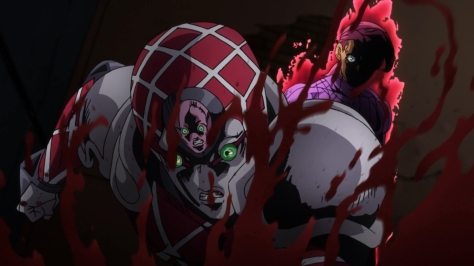 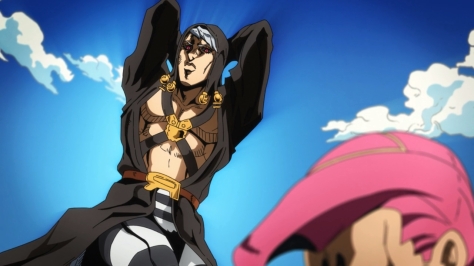 Doppio gets off the cab after confirming the beach shore as the place where the photos he has in his folder were taken but the driver demands a hefty payment. Mistaking his folder being one with cash, the driver gets uppity and Doppio’s true nature comes out again. Doppio’s strange nature is also revealed, he had previously asked for a phone and then he picks up an ornamental one from the cab driver’s rearview mirror and “picks it up” to receive orders from the Boss. The Boss informs his “self” that Risotto is nearby and advises him to reach Risotto so that they can eliminate him with King Crimson’s power, but only once they get within his stand’s effective range of 2 meters. To this end, a portion of King Crimson’s power, the one embodied by the secondary face on its primary forehead has its powers be granted to Doppio. However this information is cut off when Risotto reveals himself but finds Doppio’s genuine terror and surprise to be too real to be faking. Nonetheless, other tells tip Risotto off that Doppio is indeed the man he is looking for.