That ending though, I could hardly believe my ears but I can’t help but like it as well.

Giorno and Buccellati’s fight definitely seems way more direct and brutal compared to the fights in the other parts, I had almost forgotten how confrontational this encounter was and I was also reminded of another reason to be excited for this part: The animation will finally show what the hell is going on. With the amount of crazy effects in Part 5, interpreting a number of panels was a bit difficult when I was reading them so now I can finally see what’s going on. I always had a rough idea what was going on but I won’t lie seeing Giorno’s powers animated definitely makes it feel ever slightly less bullshit than it is. I can’t wait to get to the other fights in this part.

We are given Giorno’s background involving his heritage to DIO, through Jonathan’s body, and his neglectful mother. As a son of a Japanese woman, Giorno eventually moved to Italy after his mother remarried an Italian man. Much like his mother, his father was abusive and broke Giorno’s self-worth and esteem, making him an easy target for the other kids growing up. Giorno’s life changed forever when he found a man bleeding in an alleyway obscured by some plants and rubble and empathized him greatly, reminding him of the days when he was without his mother. When gangsters showed up and asked Giorno if he saw a man that fit the description of the injured man in the alley, Girono lied and guided them to a different direction, with the first subconscious activation of Gold Experience being noted here which manifested by making the grass around the injured man taller. From that day on, Giorno was treated better by the community and by his father when the gangster returned to silently watch over Giorno to show his gratitude for saving his life. From that day, Giorno realized his true dream. 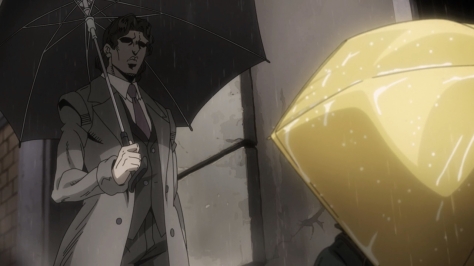 The scene returns to the train-car where Buccellati approaches Giorno and the latter ponders over what might happen if Gold Experience’s abilities make contact directly with another human but he finds no other option and strikes back against his assailant. GE’s abilities surprise Buccellati and he is squarely hit in the chest and sent back flying. Giorno hopes that the fight will end there and promises to the other train car passengers that they’ll try not to get them involved in this. Buccellati gets back onto his feet and crushes one of the handles on his way up much to his surprise. He also jumps up to a strange height when he just intended to get up and finds himself strangely empowered. He makes his way to counter-attack but his fist passes right through Giorno. Buccellati realizes that all that just took place after he got up was his overly sensitive consciousness acting out what he intended and GE’s abilities filled him with so much vitality that his senses have gone completely haywire. Giorno takes this opportunity in Buccellati’s strange but incapacitated state to deliver a punch right in the jaw, a blow so powerful that sends one of his teeth flying.

Buccellati acknowledges Giorno’s threat level and calls out his own stand, Sticky Fingers which is more than a match to trade blows with GE. However, Buccellati states that he really doesn’t want to deal with GE’s abilities and decides to bail out, using his stand’s ability to apply a zipper to the train wall and leaves. Giorno gives chase, knowing that if he let Buccellati get away, he’ll just be harassed for god knows how long. Giorno leaps from the train window and gives chase through an alleyway and Buccellati jumps into a crowd of people in response. The crowd gets tangled up in a fall and they all walk away soon after reconciling and Giorno is unable to get a visual on Buccellati. However, a fly buzzes around one of the people from the crowd and as he smacks the fly in annoyance, Buccellati is forced out of hiding after the fly that was hit was actually his broken tooth.

Buccellati decides to just deal Giorno right here and now and the latter knows that he has no intention of letting Buccellati escape and the two close in on each other to get the first hit. Giorno strikes first and lands a blow on Buccellati’s arm, ensuring a victory but as the finishing blow tries to make its way to Buccellati, Sticky Fingers swats the attack away and lands a number of hits on Giorno, with zippers showing up on his body. Buccellati reveals he cheated by replacing his arm preemptively by attaching the arm of the kid he was just hiding in to nullify GE’s ability. Buccellati now goes in for the kill but Giorno’s determination shines through as the latter tears off his zipper-dangling arm and hurls it at Buccellati to get a clean hit first with the added range. Buccellati fears for his life knowing that effects of GE will amplify his pain and surmises he’ll die if he eats a flurry of punches but as Giorno’s fearsome figure walks forward, Buccellati is surprised to see Giorno move past him instead. Buccellati demands to know why Giorno has elected not to finish him and Giorno explains that Buccellati is a good man. He explains that he saw Buccellati hesitate when he saw the arm of the kid he used have noticeable drug-use marks and Giorno deduces that Buccellati isn’t too keen on the gang’s drug activity. Giorno declares that Buccellati will become his ally in his grand plight to seize the seat of Boss in the gang.