The provisional license exam continues onto the rescue portion of the heroing business.

I ended up giving in to the fact that I’ll continue to need two episodes to cover for episodes involving this arc but with Episode 58 being an original, I don’t think I’ll be covering that. I mentioned before that I wasn’t too keen on this arc compared to the bombshell that was AfO vs. All Might but next week’s preview definitely triggered a memory and I actually know what’s coming next. At the very least I can look forward to that before we enter a rather long arc with Mirio and Overhaul that I think we won’t even see animated for quite a while.

With all of Class IA miraculously making it past the first elimination process the next phase of the exam begins as a enormous cityscape the kids fought in is repurposed into a rescue scenario where a “professional civilian actors” company will be playing the role of injured and panicking civilians for the students to try and rescue. The classes all travel in one huge group but soon learn to separate after some realize that they’re not meant for a certain type of environment given all the debris. Deku gets one huge wake-up call to his hero attitude after an actor playing a child criticizes him for acting worried instead of being there to inspire hope and assure everyone’s safety. Similar things happen throughout the rest of the testing area as students toil to not only satisfyingly save the civilians but also make the correct judgment to either help out or move on to help more people with their given abilities. Even Inasa’s control over wind is criticized despite his talents. 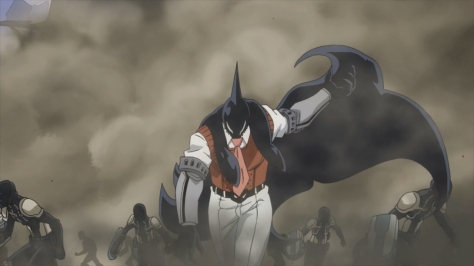 Eventually the kids get a decent grip on things and move the civilians to the safety area, but all that comes to a halt where the second half of the exam begins. Gang Orca, one of the top 10 heroes in the business appears with a group of faux-villains. Coupling onto the already tough examination of dealing with high-maintenance civilians, the villain intervention has even Aizawa thinking the committee is pushing the kids too hards. Todoroki intervenes while Deku and the others move the civilians to safety and he is joined by Inasa, both of who came to clashes as Inasa outright stated that he despised Todoroki’s family. The conflicting super powers of the two schools have their powers come to clashes and leaves Gang Orca and his posse to incapacitate both of them. We get a quick recap of Inasa’s past where he was an enormous fan of Endeavor but his devotion was met with disdain and utter indifference, shattering his image of Endeavor but not wavering his dream to become a hero. He’s offended one more time during entrance examinations where he first met Todoroki and met with the same scorn and indifference. Inasa explains how Todoroki was the same as his father and the former is stunned to think that he is the same as his despised patriarch.

While still incapacitated, the conflicting duo invoke their abilities to detain Gang Orca in a tornado of fire and reinforcements quickly arrive to fend off the goons. With most of the civilians secured, Class 1A shows up to rescue their comrades and Todoroki is once again saved by Deku after Gang Orca finally gets himself out of his and Inasa’s techniques. Bakugo’s trio with Kaminari and Kirishima were the ones who extended the rescue period due to Bakugo’s disposition towards civilians but the exam concludes and the results are quickly shared with the students.