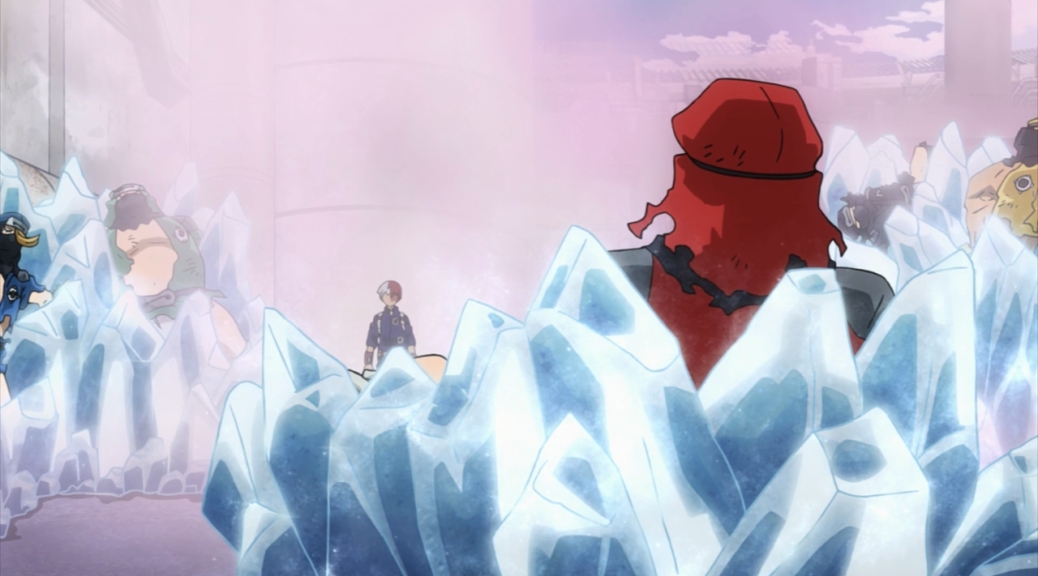 And sure enough, I lazed around on Thursday and Friday and got this up late to make it a two-feature. I had this fully written up on Friday but decided that I was already too late on it and decided to wait.

I’m seeing a bit more dips in quality but I guess it’s only natural seeing as though it’s a double-length seasonal show.

The examination continues where Todoroki is pressured against by a ninja squad who are able to match out his capabilities through cooperation. Both fire and ice are constantly pushed back by a team of 5 and Todoroki is forced to run and try to make use of his environment to grab a hold of the situation. Todoroki retreats and pierces open one of the mock city’s water towers and he baits out his competitors and detonates it, sweeping them all in one move. On the other end, Shoji, Momo, Jiro, and Tsuyu enter a building where they assailed by another group of students, led by a girl who’s abilities is extremely high intelligence when she drinks tea and closes her eyes. The opposition crack the building’s windows, turns on the AC, and completely deprive the UA kids of their usability as they’re given no visual of the situation and the cold brings down Tsuyu, all the while Jirou is weakened after an extremely loud noise is played while she probed the building.

Momo is given the role to find out a proper way to escape their situation and she is on a time-limit as the rest of their enemies lie behind their only escape route and their powers are currently limited within the cold. The opposing class’s leader surmises that Momo will expend her limited power into creating something to support her teammates to buy time which will eventually render all four of them useless and decides to bide her time before they come in for the finishing blow. Momo however takes the risk of making an object she never made before and it is revealed to be an enormous amplifier for them to use Jirou’s abilities to pacify the enemies lying on the other side of the door. The team is saved but Momo is caught and brought into the other room and she is able to defend herself long enough for the rest of her friends to come save her. Apparently such conviction and loyalty to one’s friends surprises Miss high IQ and she admits defeat. On the other end, Deku leads Uraraka and Sero to try and find some safer ground to recollect themselves while Kaminari and Bakugo engage Shiketsu High’s Shishikura after the latter incapacitates Kirishima. Aizawa shares his sentiments to Ms. Joke about how two of his students in particular inspire the rest of the class and that he has high hopes for them.

Shishikura is able to subdue Bakugo after his sent one of his flesh pieces around the arena and Kaminari is the one to save the day as his newly acquired gadgets allowed him to concentrate the streams of his electricity. When Shishikura is shocked, he momentarily lets go of his abilities and the people he balled up return to their original forms are restored, allowing Kirishima and Bakugo to strike back. Sero and Uraraka devise a mass trap using zero-gravity rocks and tape to send a load of them falling down on the playing field, allowing for easy tag-outs. The last group falls on Iida and Aoyama, where the latter was too scared to do anything but Iida showed up to try and cheer his classmate onto glory. Aoyama is still hesitant and when more opposing students show up to tag them, he decides to sacrifice himself so that Iida can at least pass. Aoyama shoots out a skyward laser which attracts the other students but this also prompts the rest of Class 1A to arrive and cooperate so that all of them miraculously come out of their examinations together.