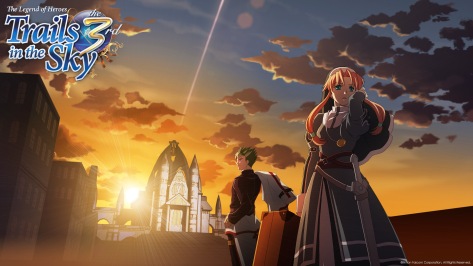 Awkward timing and circumstance led me to completely forget it was Wednesday. The end of the season is approaching pretty quickly and I’m once again feeling that certain type of way when the season is close to ending. It’s nostalgic saying that because it’s been a while since I’ve been active like this in a while and I can only hope that it somewhat remains the same going into the Summer season, my usual time of year where I think there’s nothing for me to watch, or at least, cover in some capacity.

With a new picture and new 50 post mark, we switch on over to Trails in the Sky’s 3rd entry that’s a bit different than the rest. The spotlight has shifted from Estelle and Joshua and the new protagonist features Kevin Graham, a member of the church who is introduced in SC’s early chapters. The story takes months after the events of SC where all the characters we know and love have continued their lives in Liberl. Kevin is sent back into the country and is tasked with handling a mysterious device found beneath a chapel in Grancel. Kevin is reunited with his childhood friend and adoptive family member Ries Argent before they’re drawn into a strange world within the mysterious device and the cast members both primary and supporting are drawn into the world as they attempt to unravel its mysteries.