Pepe and Glenn surprised me with their voices during the press conference and I guess I didn’t fully believe Fujimaki would let things slide without having something to massively gain. The set up for what will truly happen ends up like the beginning of the series where Joe is asked who to bet for and against while Nanbu clearly has something scheming.

Fujimaki has Nanbu reveal that their negotiation at the beginning of the series was not to simply pay him back by winning Megalonia. Instead, Fujimaki and Nanbu agreed to stage yet another ruse and fix Joe’s match in Megalonia for the biggest payout they’ve ever seen. Nanbu comes clean at how Joe will not be having his desired rematch with Yuri and will be arranged to throw his match with Burroughs before he even gets the chance to stand in the final ring. Joe is understandably outraged and leaves while Sacchio is told the hard truth about how this team wasn’t meant to bring Joe to the top. As the team un-ceremoniusly disbands, the press meeting for the 4 fighters in Megalonia goes on without Joe. Joe is once again back to the gear-repair shop he frequented earlier in the series where he watches the press conference. 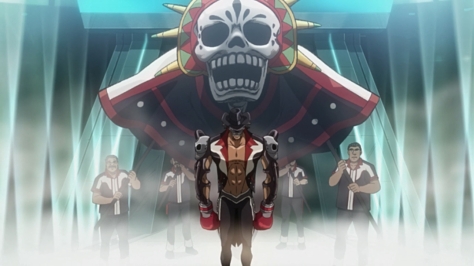 Nanbu tracks down Sacchio to give him back his stuff before asking him to come along with him for a bit. Nanbu reveals that he’s been made aware of Sacchio’s parents and how his father was an engineer for the Shirato Company before his talents were taken advantage off before he was disposed of. His mother, while looking extremely similar to Yukiko, apparently passed away by sickness a year earlier. Nanbu brings Sacchio to the Shirato’s mansion where there’s a party going on and Nanbu hands Sacchio a shiv to exact his revenge against Shirato. Sacchio tearfully states that instead of vengeance against the company, his dream was to see Joe make it to the top and Nanbu decides to compromise. Nanbu approaches Yukiko at the end of the party to ask her to shelter Sacchio for a while until Megalonia ends, not for his own sake but as recompense as to what the kid had to go through thanks to her company. Nanbu also shares the credentials about Sacchio’s parents if she had any doubts. Nanbu says goodbye to Sacchio as he leaves the estate. 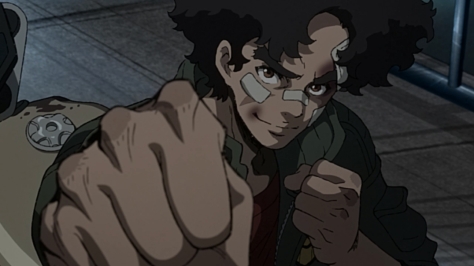 Joe attends the first Megalonia fight between Yuri and Pepe Iglesias where the latter seems to be riding the momentum against Yuri but in a single attack, Yuri takes the lead and knocks Pepe out. After the match, Joe contemplates by the waterfront before he runs into a dog and Yuri approaches him after noticing his dog taking an interest in Joe. The two share a regular conversation for once and Joe expresses his simple desire to fight Yuri again and asks Yuri what drives him to fight so well. Yuri responds that someone saw through someone as hopeless as him and gave him a life and dream to achieve, and he’d do anything to help them reach their’s. Seeing such similarities, Joe is angered at how his dream and fate seems to have come to a dead halt. Nanbu comes back “home” drunk after drinking with Fujimaki where he recounts the classic story of the frog and scorpion.