So two seasons of turmoil translated to 3 months of in-universe school time for the kids at UA and now they enter their summer break. Instead of having some leisure time, the class is assigned to summer training camp and they all get on the bus to head to the mountains. The bus stops after a bit on rest stop opening to let the kids get some fresh air and a car parked next to them opens up and Aizawa reveals that their grueling summer training begins now. The class is introduced to the pro-hero team of Pixie-Bob and Mandalay and the class is immediately thrown off the cliffside they were resting at as they’re told to navigate the forest filled with monsters and reach the building in the middle before noon. Pixie-Bob’s ability with controlling earth and creating creatures out of them stand in their way to their destination. 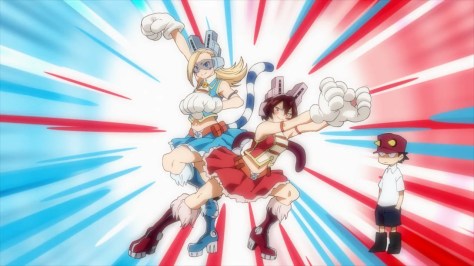 The combined efforts of the class are able to make it to the building but arrive at twilight, prompting some angered responses but Pixie Bob is more impressed on Deku, Iida, Todorki, and Bakugo’s performance for acting without any hesitation. Deku takes the time between Pixie Bob’s desperate attempts at nurturing future spouses to ask whose kid it is that’s been hanging around them since they met on the cliff. Mandalay explains that the child is her cousin’s kid, Kouta, and Deku tries to greet him, only to get socked in the groin.

The rest of the night goes without issue as the kids eat and head to the hot springs and Mineta tries to pull the good ol peak but Kouta stops him at the top of the wall. Kouta himself falls after the girls thank him for stopping Mineta and Deku is there to catch him. He brings Kouta back to where Mandalay and Pixie are and hears the story of how Kouta dislikes the idea of heroes after his parents, who were also heroes, died in an accident and the incident imprinted a negative connotations for heroes in general. The next morning, Bakugo is up at the plate to repeat the exercise he did during the beginning of the semester, to throw a baseball as far as he can. Bakugo scores similarly to three months ago and Aizawa reminds them that while they all of grown through experience, they’ve only improved by technicality and gaining more confidence in their limits. This training session will once again, allow them to test, exceed, and gauge their newfound limits. Elsewhere, Tomura’s goons prepare to strike after their preparations are finally complete.

I’ve been saying this since the start of Season 2’s final episodes, if Season 3 ever happens, we’ll be heading into overdrive right from the get-go. The series of events that are about to unfold all start with the incident during UA’s summer training camp where, as you can already tell, Shigaraki has sent a team of villains to where the kids are away from the other pro-hero teachers and All Might. I’m going to give Season 3 either half an episode at the soonest or an episode and a half before everything goes to shit, I can’t wait.