As soon as Last Encore cut itself short to continue during the summer, another adaptation of a videogame comes to take its place. Everyone and their mothers have played Persona 5 or has heard of it through its immense popularity at this point so I’m not sure how much I should really be explaining here since tons of people have played Persona 5 over the likes of Fate Extra. This time we can all be judgmental about how P5 the Animation will handle its adaptation.

But so far, there isn’t really anything to address.

Straight out of the gate, Joker diverts attention away from the casino guards in a flashy display of agility while the rest of his team make their escape. Joker breaks through the casino’s glass windows with all his pompous flair and glory, only to have his teammates point out some threatening readings and lo and behold, security forces were anticipating Joker’s getaway. Joker is captured and brought into interrogation and he gets roughed up before Prosecutor Niijima is able to make her way into the room. Niijima asks what Joker’s plans was and we flash back to the beginning of it all when Joker gets himself between a drunkard and his girl, the drunk falls over, and Joker is arrested on charges of assault. Joker’s parents agree to have him leave his hometown and into the city to attend school there for his probation. Joker arrives by train to Tokyo and finds an app on his phone and he promptly deletes the suspicious icon, but not before seeing a mysterious figure staring at him from across the street.

Joker enters Yongen-Jaya to meet with his new guardian, Sakura Sojiro after making his way around the block finding the man’s house and then his cafe, Leblanc. Sojiro welcomes him decently enough but chides Joker for sticking his nose into someone else’s business and tells him to behave while he’s under his care, as he’ll be thrown out at the first sign of trouble. Joker eats dinner alone and falls asleep with the mysterious app from before activating and he finds himself awake in some prison. He is bombarded with some cryptic portents before waking up in reality and preparing to head out with Sojiro to take a look at the school he’ll start attending, Shujin Academy. He meets the Principal and his homeroom teacher before he and Sojiro return home and on their way back, they hear news reports about another big accident caused by some strange mental impulse. 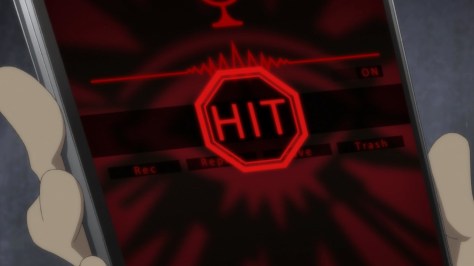 The next day, Joker shields himself from the rain on the way to school and meets a fellow student, a blonde girl who picks a petal off his hair before a teacher offers her a ride through the rain in his car to school. She accepts and Joker declines the teacher’s offer. Enter Sakamoto Ryuji who badmouths the teacher in the car, Kamoshida, and he learns that Joker is the rumored transfer student their school was accepting. The two hurry to school in the rain but find a bizarre castle where the school is supposed to be. They go inside and find armored guards who promptly bring both of the guys to their knees and they awaken to find themselves trapped in cells. Kamoshida, now sporting a cape, crown, and speedo shows up to taunt Ryuji for his insolence against the king and prepares to kill him right then and there. Joker tries to stop this from happening and a voice in his head resounds with power when a mask painfully forms around his eyes and he promptly rips it off himself. Joker calls upon his persona, Arsene to stop the mess from continuing.

So what I just did was cover the opening acts of Persona 5, nothing really new or exciting about that since so far, it’s basically what the game covered so far. Not much to extensively critique here as Persona 5’s opening and first chapter is without a doubt it’s highest point and as long as they play it straight, it’ll remain that way. My statement should however reveal enough about my thoughts on the rest of the events to come. So I guess special mentions go to Takemi showing up in the Yongen-Jaya montage and bits of Beneath the Mask playing in the back.

There’s really not much else to say, it’s just the beginning of Persona 5 in a neatly animated format. I will say that hearing more of Jun Fukuyama enunciate something that isn’t just “yosh” is pretty nice, even if we barely hear him from him. It’s still too early if he’ll end up like Yu did in P4’s animation though, where he’ll just say the weirdest things with the straightest look on his face. The visuals, aside from that awkward phone pick-up scene, were decent. Now the last thing I need to address is on Joker’s name. I’ll come clean and say that I’m not fond of Amamiya Ren at all. Something about Joker’s frizzled hair, expression, and glasses, even if they don’t actually function as glasses, basically SCREAM Akira to me. Joker just happens to be a universal name for him so that’s what I’m sticking with me.

If you haven’t already noticed, I’m really liking all the screencaps I took, so much that I’m putting them in every gap in text. I’ll leave it at thsi for now and see what else the week has coming for us. 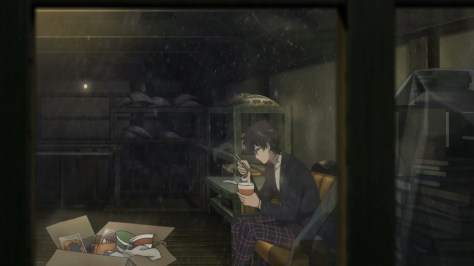