So as it turns out, it only needed one episode of angry and anxious exchanges between Bakugo and Deku for them to beat All Might’s challenge. I guess that decision definitely makes sense since the episode preview showed that scene with Tomura and Deku and I feel that’s as poetic as an ending you could do as far as this adaptation goes. Good choice, it’s something I completely forgot.

Like always, it’s time for the seasonal round up so look forward to it.

Deku and Bakugo enter their training field as their test begins immediately as the gates close behind them. Deku quickly tries to reconcile their awkward gap and try to plan out a strategy against the biggest hurdle they’ve faced in their lives but of course, Bakugo rejects any attempt at conversation. Deku raises his voice against his “childhood friend” but All Might comes to them instead. While Deku finds it smarter to run, Bakugo holds his ground and gets thoroughly beaten by All Might’s immense fortitude. Deku isn’t safe from the examination either and he gets equally roughhoused. Deku keeps trying to tell Bakugo to retreat with him but Bakugo pays him no heed and continues his fruitless assault. All Might gives a short lecture on how Bakugo’s aggression is directed towards Deku’s quick advancement in his abilities. All Might gives a very simple explanation to this, saying that a Lvl 50 character takes a longer time to level up than someone at Lvl 10. 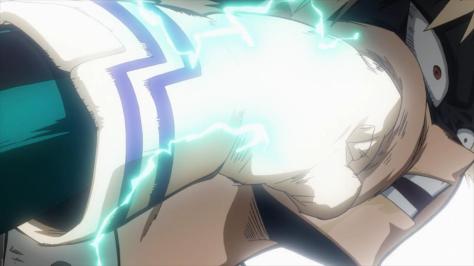 Deku reminisces and while he doesn’t exactly appreciate Bakugo’s hatred, Deku admires a certain part of Bakugo’s demeanor and he delivers a punch to him instead of All Might as he hated hearing Bakugo accepting defeat. Deku carries Bakugo off to recuperate. Deku gives that ultimatum to Bakugo but the latter responds with his own logic that running away from All Might is equally as futile to fighting him and the two decide to compromise. The two ambush All Might where Bakugo sneaks behind him to blast him with a full force explosion from his gauntlet, with Deku following his lead and going in front of All Might and using one of Bakugo’s gauntlets to attack from both sides. The joint assault proves effective and the two book it to the exit gate. As the unlikely two go over their plan, All Might catches up with them and the two get destroyed again. Bakugo decides to bet on one last resort and he throws Deku so he can get to the exit while he kept All Might at bay. Deku’s landing is however compromised by All Might but as you might expect, Deku stands back up after recovering his strength and punches All Might with all he’s got while All Might was about to finish off Bakugo.

The strike squarely stuns All Might enough for Deku to drag the unconscious Bakugo to the exit gate, earning them their victory. The duo are then quickly escorted to the infirmary where All Might is chastised for his rough treatment. As Deku goes over the results of the examination, we switch scenes to the bar Shigaraki and Kurogiri hide in and they are joined by two new aspirants to the League of Villains.