Onihei hits with another effective episode.

I tried to get this one out a bit quicker since other hobbies are starting to pile up on my free time. Would have gotten this earlier if I didn’t stay up til 5 playing games and cursing daylight savings for robbing me of 1 hour to play more games but oh well. I’m sad to see this season go but we’re reaching that point where I’ll be tackling seasonal reviews. Onihei is sitting on a weird spot since it’s one episode behind so 2 of its final episodes won’t be getting covered unless I like it so much that I go out of my way to do so. We’ll see when the time comes.

Onihei (9): Heizo’s son, Tatsuzou unexpectedly announces his dedication to the way of the blade and leaves his house in slight confusion over his sudden passion. Hisae worries for him while Heizo calmly accepts the nature and inevitable foolishness of youth. This has him recall his past during his own years when his own father sent him to the Takasugi Dojo to temper his rebellious spirit and the person who helped mold him into the person he is today. In his memories, Heizo recounts at how a wanderer appeared in the dojo and challenged the dojo head where the two just stood motionless for 30 minutes. Heizo tries his hand against the newcomer, Matsuoka, but is swiftly defeated. The younger Heizo’s life is detailed of his estranged relationship with his family’s matriarch and his sympathetic father who still cherished his illegitimate son. Heizo decides to cool off with Sama and the younger Hikojyu and they have fun in town where they party with girls, get drunk, and get cheated out of money in gambling and erupting into fights. As the days go by, Heizo is enamored by Matsuoka’s skill and that night, Matsuoka appears to aid Heizo and Sama after the gang members from before who they ousted in the gambling ring show up for a fight. Matsuoka wipes them all and later shares a drink with Heizo and how their circumstances are very similar, to a point where Matsuoka despises his own path in life and strongly urges for Heizo not to make the same mistakes he has. A few days later, Matsuoka states that he must leave the dojo soon as he only stayed around to take care of a relative and at the same time, Sama and Heizo get a tip off from Hikojyu that a thief is looking for two people to help row their escape boat. Heizo and Sama show up for their thieving duties but the thief’s ring leader turns out to be Matsuoka and he angrily demands to know why Heizo would go against what he said and throws him and Sama off the boat, intent on not letting them fall as he had. In present day, Heizo explains that Matsuoka wasn’t an accomplished swordsman at all and had fooled the dojo’s master, but Heizo feels that to this day that he would have been lost without Matsuoka’s guidance. Tatsuzou reappears and Heizo guesses correctly that his son showed up to ask for money to fool around with and Heizo let’s him go, only after mirroring Matsuoka’s words that was said to him many years ago.

Masamune-Kun (10): Kanetsugu Gasou is a mysterious fatso who appears before Aki and apparently hails from a noble family. He also comes with a letter from his family head with intents to wedlock himself with Aki and Yoshino attempts to call Masamune who’s too busy working out in the mountains. When he returns, Masamune is aghast at how close Aki is with the portly Gasou and is even more shocked to hear their circumstances. Masamune takes Yoshino to consult with her but she is only able to confirm his fears that there doesn’t seem to be anything “officially” fishy about him. Masamune is hard-pressed to find a way to break in between them and his chance appears when the upcoming school festival has his class and Aki’s apparently wanting to do the same play of Sleeping Beauty and Masamune makes the wager that whoever class’ performance gains the superior reception will “win over” Aki. Entering the final stages of the anime arc and I’m betting on anime original ending that will skip the entire fiasco with Kanetsugu and go for the “reveal”.

Seiren (10): Kyouko’s arc continues where Shoichi’s Christmas plan for loners with Ikuo gets shafted after the latter reveals that he hooked up with an old crush from middle school. Kyouko continues her diligence in the home economics club while her seniors are forced to cooperate with the disciplinary committee member we’ve seen across a few episodes. Shoichi consults Tsuneki on how to ask a girl out properly and gets a flustered and faux response, but Shoichi leaves with his own decision set on how to ask Kyouko out. Later, he and Kyouko walk home and he asks her if she would be free to spend some time with him but her new club duties doesn’t allow her to be free on Christmas Eve. Kyouko is a bit saddened for turning him down and the the seniors apparently find Tsuneki someone worth consulting but Tsuneki’s deal on this route happens to be her enormous streak of compulsory lying to maintain her image. Tsuneki says all the wrong things Kyouko doesn’t want to hear when she reveals Shoichi consulted her but later, Kyouko seems assured that Shoichi definitely isn’t that sort of person. So far, still pretty good. Tsuneki is in more scenes than she needs to be though. 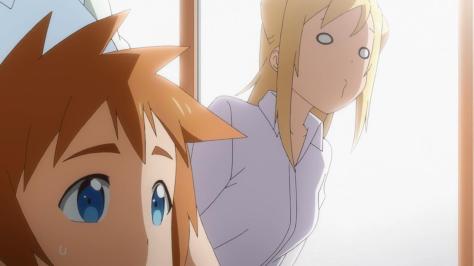 Demi-chan (10): Machi gets lightly perturbed when Hikari declares how she kissed Takahashi on the cheek and tries to find herself a way to do the same. Machi’s mishap with dropping her head while following Takahashi around gets the latter dramatically worried and it freaks Machi away for a bit after seeing him get angry but the relationship is quickly fixed. The main meat of the episode has Takahashi and Machi visiting the former’s friend in his university research lab where they discuss the peculiarity of a dullahan’s biology. Takahashi’s friend however deems the relation to Machi’s head and the rest of her body as a more romantic phenomena with how instantaneous transportion is achieved through the non-visible “neck” and he works out a hypothesis that it resembles a wormhole. Not too noteworthy of an episode to be perfectly honest.