I made an error for including Onihei in the previous week’s recap instead of including it in this one. No worries since the new week is around the corner. It’s kind of nice to have all the shows I’m watching be decently entertaining without the usual flaws I’m so critical of but that’s probably because I force myself to watch things I know will be bad. Even without the events that occurred this episode might have been universally interesting, I’m really looking forward to future episodes.

I guess in Seiren’s case, I just want to see another heartwarming love story not only with Tsuneki, but with others. Masamune-kun is thankfully nowhere near as stretched out as Nisekoi so that’s a good thing. Demi-chan is something I’m looking forward to for that sensei on sensei romance and Onihei is something I’m definitely new with so there’s some excitement in that as well.

Seiren: Shoichi’s romantic escapades continues as we dive into Tsuneki’s character a bit more with her attitude towards her predicament being mistaken for Shoichi’s shameless girlfriend. Apparently, Tsuneki was put in the summer lesson camp for her apparent lack of academic skills which had her parents forbid her from going on the getaway vacation trip she had intended to go to. Tsuneki plans to leave but decides to plan her escape after a few days and her exchanges with Shoichi reach a point where she decides to stay a bit longer. Tsuneki’s character dynamic is definitely a far cry from what we got from Amagami so I’m interested in where her romantic inclinations will take our rather imaginative protagonist. 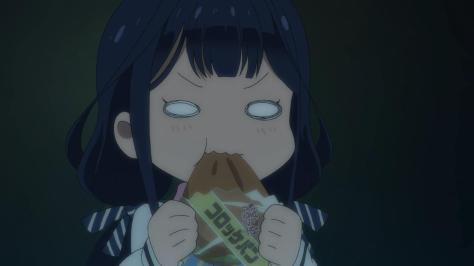 Masamune-Kun: Masamune’s secret seems to be out of the bag by the one person who he didn’t account for in his revenge plot. Koiwai, Aki’s apparently scatterbrained servant who mostly runs off to do her errands happens to remember Masamune and Aki but doesn’t seem to mind his attempt to try and get back at her. Masamune’s advances seem somewhat effective as his confidence is boosted by one of his classmates trying to ask him out but he politely declines as to continue his “relationship” with Aki but the latter rejects him by the end of his endeavors.

Demi-chan to Kataritai: The Dullahan gets the focus of this week’s episode and how she goes about her daily life with her head in her arms. This is the “first” case of any strange lifestyles since Vampire mostly keeps her quirks easily hidden while being a Dullahan is incredibly less subtle. I love how everyone is pretty much enamored with Takahashi’s well-toned arms and we’re not even hiding the fact that he’s going to get himself some major interest by the rest of the girls. Hikari’s expressions were also entertaining which helped break the monotony of the relaxed pace the date went with Takahashi and Machi.