Diamond Is Unbreakable is one of my favorite Parts and it starts the more complex and intricate nature of what Jojo becomes famous for. It’s the transition between the burly muscular men of Parts 1-3 and to the effeminate, lanky, and ever so slightly more realistic style that Araki shifted to during Parts 4-5 where the change is apparent. It’s also one of the Parts I was entirely excited about seeing animated because Part 3, being the most famous and widespread, had itself and OVA and other serialization attempts. Whereas the OVA had some of its own merits, Part 3’s complete anime-treatment was exciting on two levels. First, it was finally complete after decades of waiting and second, the infinitely superior successive Parts were to follow. Nothing against Parts 1-2, those were a blast to watch but Part 3 was when Stand battles taking the hit or miss “Enemy of the Week” format followed. A handful of these weekly battles were good but it was made up for with the Final Stretch with the lead up to DIO’s World which kind of made up for it.

Nonetheless, Part 4’s adaptation was something I went in with complete faith and as anyone who stuck with my weekly ramblings saw, my faith was shaken part way through. I’m going to keep this short since an in-depth review of this would just turn into a review of Part 4 as a whole. We can save that conversation for a later date but for now, I’ll just be judging the anime as an adaptation. 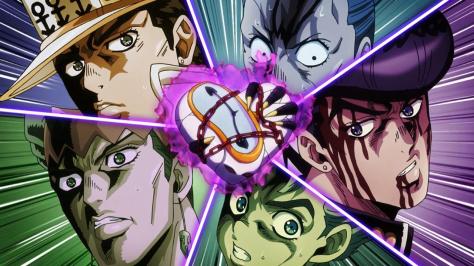 The immediate change in styles is apparent from the transition Part 3 and Part 4. We’re no longer in the territory of enormous shoulders and rigid facial bones. Part 4’s early art was still reminiscent of Part 3 up and until around the middle of Koichi and Rohan’s arcs. Part 4 gained it’s true style around the time of Tonio’s arc and David Productions stuck with the consistent and “distinct” smooth faces of Part 4 before its eventual transition to thicker lips and thinner body-frames that’s synonymous with Part 5. I was admittedly skeptical of the artstyle transition taking place way too quickly and how the noses seemed a bit too off, especially Koichi’s. But as the series went on, I got really used to it and if anything, the close up shots turn facial details really sharp and a lot closer to the manga’s style during tense moments. This was done as early as the fight with Angelo with Josuke’s confident close-up shot being a good reminder of faith that carried through the rest of the series. As for colors and backgrounds, David Productions are definitely used to the crazy amounts of color variety that Jojo is known for and that fact remains true with Part 4’s adaptation as its never one color and always has its scene to scene transitions with a staggeringly varied color palette. It’s no surprise that DP knows the series they’re working with also implemented alternate color costumes for the given characters that reference volume covers and color spreads. Speaking of transitions, some notable scenes such as the ones in the final episode as well as an early example of Jotaro in the start of the series had some really clever scene transitions.

Animation and the likes went real strong up until the middle portions where facial details, mostly the faraway shots, became really poor in quality. The most noticeable screw up being Killer Queen’s reveal that was “redeemed” the week after with the immense amount of detail they used for it but most of the episode and the episodes following suffered from a bit of visual quality issues. For better of for worse, this is what bluray releases are made for so I’m not too perturbed about how these hopefully temporary visual hiccups will be remedied. I mostly think that the animation team taking no breaks like they did with Part 3 may have something to do with this since Part 4 aired for 39 weeks straight.

Where music and sound effects are involved, I don’t think anyone will disagree that Part 4’s soundtrack and effects were nothing short of amazing. Sound effects remain as polished as ever and I don’t think there’s much to be said about them other than they kept the Stand effects such as their individual attacks and “Stand in and out” phasing noises were really cool. Killer Queen’s especially with how it always appeared in a shadowy effect that was usually invoked from Kira’s eyes where both glow red for a bit before Killer Queen comes out. The music was also a pleasure to listen to and I think everyone has pretty much fallen in love with a few select tracks. Off the top of my head, Josuke’s motif was stuck in my head the moment I heard it in the preview trailers. While Jotaro’s own Stardust Crusader theme carries itself with very heroic sounding effects, Josuke’s BREAKDOWN really reflects his youth and his somewhat rough around the edges demeanor since he’s still very much a punk with a heart of gold. Kira’s theme also gets an extremely special mention since he has at least five freaking themes for himself. I mostly prefer his regular piano track and his altered track to reflect his switch to Kosaku.

I think the most discussed issue where sound is involved is definitely the Openings. To be perfectly honest, the openings and endings are the ones I get excited about the most because I’ve already read the series and know what and when something is going to happen. While it’s exciting to see certain moments animated, the only “new” and exciting thing I’m always happy to see is what sort of crazy opening they can make and what other Western song they can use for the ending. Since it was just a straight shot from 1 to 39, DP kept I Want You with little changes after each “arc”. It definitely grew on me the slowest but I liked it by the end and its change to feature nearly everyone in the ending is definitely appreciated for someone like me who likes big casts of characters. Whereas Roundabout became a full-on meme, Walk Like an Egyptian was an unexpected wonder, and Last Train Home being extremely tranquil and depressing, I Want You is not my favorite of endings by theme nor by visuals but I still like it nonetheless.

The true fun comes with the openings and I have to say that I’ve particularly loved all 3 openings for Part 4. Sono Chi no Sadame and Bloody Stream are quite possibly things of legend while Part 3, in my opinion, had the weakest openings. End of the World was fun but only after I saw the altered version with DIO and The World. I fell in love with Crazy Noisy Bizarre Town immediately with its vibrant colors and happy-go-lucky tune that I really felt that it fit the general tone of Part 4 before Kira’s arrival turned things more grim. chase is something I also fell in love with immediately since I knew it signaled Kira’s introduction. People complain how it sounds like any other shounen song and I don’t completely disagree but the visuals made it so damn satisfying to watch since it has the most amount of foreshadowing in an OP for the series aside from End of the World, hell chase might have more. Great Days took me a while to really get into liking since I wanted it most of the song to keep the same instrumentally heavy vibe its opening seconds had. I came to love it either way by the end. By all elements combined though, I think my rankings go chase > Crazy Noisy Bizarre Town > Great Days.

Last but not least, voice acting. This is rarely ever a problem but where Jojo is involved and with slight worry by straying away from the near-PERFECT cast of voices from All-Star Battle, even I was a bit skeptical with some of the changes. The most prominent being Josuke who was previously voiced by Hatano Wataru in the ASB rendition and I really loved his gruff voice that fit Josuke’s punk side. Ono Yuki’s voice was questionable for me because I thought it sounded a bit too light but I definitely came to feel that the lighter and younger voice was a good choice overall. I was completely won over really late but the final fight really had me believe that Ono Yuki’s Josuke was not in vain. Rohan’s voice was a lot more one-sided because I don’t like Kamiya’s voice all that much so I liked Sakurai’s version a lot more. Koichi by Romi Paku was alright but Yuki Kaiji’s was surprisingly even more fitting because as much as I’d like for Yuki Kaiji to voice more characters like Seth, his regular type-casted role of “scared guy” is fitting whether he likes it or not. Kira’s voice was actually done by the guy who did Diavolo’s in ASB and I actually couldn’t tell the difference immediately but it was that good. But with Sho Hayami voicing Vanilla Ice who was previously Pucci (now being voiced by fucking Wakamoto), I’m curious to know who the new Diavolo is going to be. 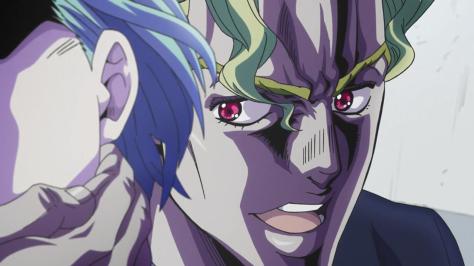 David Productions are, fittingly, in their fourth year of being involved with Jojo and their faithfulness to the manga is something I seriously admire. This wasn’t always the case because the doubt in my head midway into the series was because of how some of my favorite panels weren’t adapted as “adequately” as the other panels were. To name a few, I would have liked a full stitch of Josuke punching the spaghetti at Tonio’s, Josuke with the bike during Highway Star, Kira’s casual walk-by murder, and the final spread of the prelude between Kira and Josuke’s fight when the latter discovers the former. However, my disappointment with the particular spreads were partially washed away with the amazing amount of detail the final fight had with their panel transitions, so much that I actually decided to utilize comparisons when said episode came out.

The most particular high-note of this adaptation is how much things were actually added into it. Where Parts 1-3 were very strict with their progression with little chance to add deviations and additions, Part 4’s environment had a lot to offer since there wasn’t much traveling involved. Morioh Radio was completely anime original but it felt so real and alive in the setting that I found it a beautiful addition to the series. Then you have all those hints with Kira starting from the opening minutes of the first episode that made it real clear that neither Keicho or Akira was the main villain. All those small hints and even the anime-original “end” that sent off the final episode was original but really added to the theme of a town full of Stand users. To be honest, these characters barely mattered in the long-run but all the openings and the additional scenes really brought home the feeling.