Without a shadow of doubt, this episode delivered all of the manga’s great scenes with excellent music choice, voice acting, and impressive animation. A perfect way to kick off the 2nd half of the series with Kira’s escape and identity swap with our apparent loser, Kawajiri Kosaku. From the looks of it, Atom Heart Father is only one episode too so we’ll be back with Kira before you even know it.

Let’s get to this

Kira struggles to make his way back to Centipede Shoes to retrieve Sheer Heart Attack but he is finally able to confront Koichi and Act 3. Koichi’s anger gets the best of him and he sends out Act 3 to attack him but Killer Queen easily deflects the blows and removes Koichi from Act 3’s range, giving SHA free movement once again. Kira approaches Koichi with his Stands and Koichi makes the decision to stop SHA from moving again, as Act 3 can only freeze one target at a time. Act 3 stops SHA but Killer Queen quickly moves to pin him onto the ground with its foot and Kira moves in and commends Koichi for dragging him back here and acknowledges his skills. Even so, Kira feels a sense of defeat and plans out how he will make Koichi suffer before he kills him and surmises only a few minutes for him to let out his anger before Josuke and Okuyasu arrive. Kira asks him if he has any tissues and Koichi denies he has any and Kira throws him his own pack of tissues before upper-cutting him. Kira then proceeds to smash Koichi’s face to the ground but Koichi mutters Kira’s name and reveals he had taken his wallet out and memorized most of his information. Koichi spites Kira and yells that how a shitty brat was able to figure him out and Kira puts a hole through Koichi’s chest in anger. 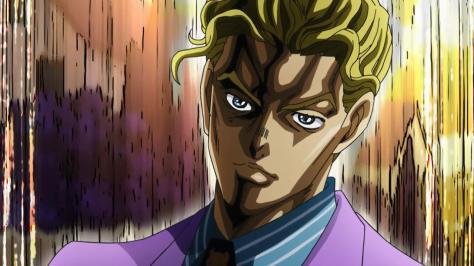 Josuke and Okuyasu close in and Kira prepares to finish Koichi off with a bomb but his nature forces him to fix Koichi’s socks beforehand. As he readies the bomb once and for all, Jotaro stands up and confronts him. Kira is unfazed and surmises that Jotaro must still be weak in his condition to even use his stand to match Killer Queen but Kira’s overconfidence gets him pummeled. Jotaro commends Koichi as well for holding Kira off on his own and passes out himself. Josuke and Okuyasu arrive on the scene and they tend to Koichi and Jotaro’s condition while Kira regains consciousness and tries to crawl away. When the duo confront him, Kira pretends to be a victim of an explosion that killed the shop owner and Josuke calms him down and states that he’ll treat him. Kira notices Jotaro regaining conscious and asks Josuke to hurry up and heal him. Josuke however asks him if a regular highschooler could possibly treat wounds and finds out that Kira definitely saw Crazy Diamond in action and identifies him as their enemy. 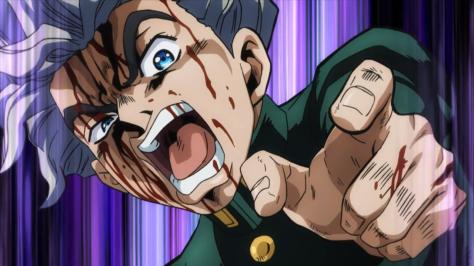 Kira is quick to lose his fake demeanor and admits that while his face, his stand, and his information have been revealed, he will still continue on with his happy life. Kira uses Killer Queen to cut off his left hand and quickly runs away, leaving the uninhibited SHA to attack the crew. Josuke is however glad that this happened and uses Crazy Diamond’s ability to force the hand back to its original source and the crew give chase. Kira runs into his employees but quickly excuses himself to his destination and the crew follow his hand into the Cinderella salon. They find Aya and a male body dead inside the parlor but Aya is able to tell them that a man dragged another man with a similar build and suit and forced her to switch them around. Josuke moves in to heal her but Okuyasu uses The Hand to drag Koichi and Josuke back as Aya was armed as a bomb and explodes. The team chase the hand back outside but sees no trace of Kira in the crowd with no way of knowing who he is anymore.

Notice anyone? We’ve got Mikitaka, Yuuya, Terunosuke, and Kira himself now masquerading as Kawajiri Kosaku.