First off, don’t skip the opening.

And second, I guess that’s where the budget for this week went. Because some of DIO’s faces were a bit off.

DIO and Jotaro clash in a flurry of fists with their stands and The World is able to land a few more hits on Star Platinum. DIO gloats that his Stand is truly the ultimate power and decides to finish Jotaro off with his timestop. As DIO moves in to deal the finishing blow, Jotaro’s finger twitches and DIO inexorably recoils at the thought that Jotaro can move in his world of frozen time. DIO wastes this chance of killing Jotaro and demands to know if Jotaro saw him move, to which Jotaro denies any claim. Jotaro then quickly re-positions himself and DIO gives chase across the streets.

DIO tires of giving chase soon enough and activates The World again and DIO begins to laugh as he finds that Jotaro had placed a magnet on him during their initial flurry. DIO then charges toward Jotaro to finish him off but much to his fears, Jotaro proves that he actually is capable in moving in frozen time and delivers a powerful punch through The World’s torso. The resulting strike sends DIO flying and crashing into a store where a chunk of glass shears off his left leg. DIO drains the clerk to heal his chest and restore his leg while Jotaro gets to ground level. DIO is fazed but is unafraid as he constantly activates The World and moves around the plaza to see if Jotaro can keep up with the constant instances of the time stop. DIO joyfully announces that he simply needs to stay away from Jotaro’s range and unveils a fan of knives in his hands. Jotaro attempts to get away but to no avail.

DIO unleashes the knives in frozen time and they all stop in front of Jotaro’s body. Just for an instant, Star Platinum deflects a number of them but becomes frozen in time once again. DIO sits back and watches the inevitable damage to be dealt and Jotaro gets knifed in multiple areas but his most devastating wound comes from the single knife DIO throws afterwards to finish the job. Star Platinum’s punch deflects it but it is redirected at Jotaro’s head. Jotaro falls down to the plaza down below with DIO falling with him.

Jotaro thinks to himself how lucky he is for stuffing his outfit with books prior to this fight but before he can recuperate and think of a plan, DIO lands near him to check on him. DIO decides to play if cautiously and lob Jotaro’s head off with a stop sign but before he can do so, Polnareff appears and stabs DIO in the head. DIO stops him and knocks Polnaref away and switches his attention to him instead. Jotaro twitches his fingers and DIO jumps back again and fears that Jotaro may be alive. To make sure, he makes use of a few police officers and makes them shoot Jotaro by the side. Jotaro receives a bullet but Star Platinum catches the bullet before it hits his flesh. DIO then decides to hear out Jotaro’s heartbeats and Jotaro uses his Star Platinum to stop his heart and DIO is finally convinced. DIO readies his beheading stop sign and swings but Star Platinum deflects the hit and punches DIO square in the head, obliterating a portion of his skull and sending him flying. DIO is crippled with parts of his brain destroyed and Jotaro approaches him to finally finish the vampire off. However, DIO laughs and uses The World again to grab on to a passing car while muttering he needs to get somewhere. Jotaro uses a knife to throw it at the car’s bumper and DIO falls. DIO attempts to escape through a manhole but is then caught by Jotaro and is given a clean pummeling by Star Platinum. DIO however announces his victory as he flies through the air and tells Jotaro to look at the street they’re on. Much to Jotaro’s horror, he recognizes his location and then finds in the cloud of dust DIO fully recovered after draining Joseph’s blood. 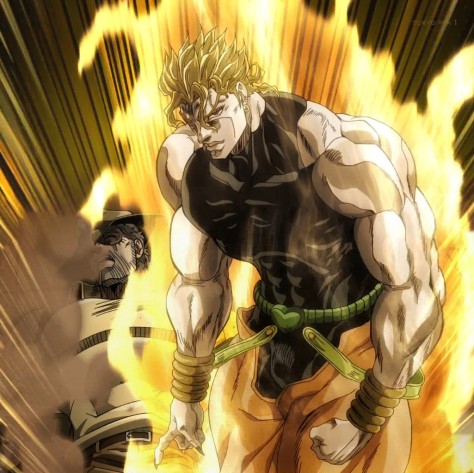