Jojo has finally ended which begs the question of what other series I will make myself cover for the seasons to come. I guess I’ll be waiting for the next Part to eventually fall upon us after the Part 3 blurays drop for the final episode. Oregairu is all riding on Yukinoshita for me and DxD was a laughable failure with that finale. Might do a short series review for both, hell scratch the “might” it’s going to happen pretty soon.

Ornstein and Smough are THE boss battles that fans have come to associate Dark Souls with. While players were given a small taste of the dual-boss fight feeling early in the game with the Gargoyles, Ornstein and Smough however show a completely separate dynamic with two different enemies are up against you. From appearances alone, this dynamic duo embody the familiar RPG boss fight of “small guy is fast but deals less damage, heavy dude moves slow but does the most”. While I won’t blame people for thinking like that, this is Dark Souls, both of them do big damage and they cover eachother’s attacks so finding an opening is tough. Plus one dies, the other absorbs their soul and gains back all their health. Ornstein has interesting lore as he is the captain of the knights in Gwyn’s army and the leader of the 4 knights, a central part of the lore. Smough on the other hand apparently is a cannibal and was denied the prestige of a knight and judging from how he reacts to Ornstein’s death, he doesn’t seem too attached to him while Ornstein at least gives a moment of silence to him. So here you go, the theme that divided the men from the boys, the theme of the illustrious Dragonslayer and the grisly Executioner. While it isn’t actually the hardest, it sure as hell made a lasting impression.

The long journey is over.

I’m disappointed by the lack of a Part 4 teaser but when you think about it, Parts 4 and 5 are the ones where the involvement with DIO are the least prominent. Sure the events of Part 4 and 5 are sourced from DIO’s actions but no part has the direct continuation from Part 3 than Part 6. Think about it, Josuke is Joseph’s son, that pulls back the family tree and Giorno is Jonathan/DIO’s son which pulls it back even farther. Only back when we hit Part 6 do we continue with the bloodline linearly.

Just pray for the BD’s to add something in the end.

END_OF_DOCUMENT_TOKEN_TO_BE_REPLACED

The end is nigh

Like last week, I was occupied with some more nerd things so I was late on the Jojo update. Songs of joy and sadness are in order as Part 3 finally reaches its animated end this Friday. I’m happy to see the objectively weakest part of the Stand series end but it was a fun ride nonetheless. But in Jojo, every end is a beginning and Part 4 just happens to be my favorite part (but that’s an understatement since I want to see every single part animated). They better end off Part 3 by having a close up for Jotaro meeting Koichi or Josuke leaning by the fountain getting approached by the upperclassmen.

This week’s theme is played in semi-middle point of the game after you brave the challenges of Sen’s Fortress and arrive atop the battlefield where the Iron Golem awaits to test your mettle in combat. The Golem itself has interesting lore implications when we take Dark Souls II’s lore into consideration but in the vanilla game’s lore, it is simply a guardian that tests warriors who wish to gain entrance to the city of the gods just above. I first saw the Golem menacingly approach the player character in the first trailer and I couldn’t wait to fight it. Heavily armored, you have to damage its legs to injure its heels and make it fall over. If you’e lucky, you might just make it fall off the fortress roof. That or just summon Tarkus to solo the boss. 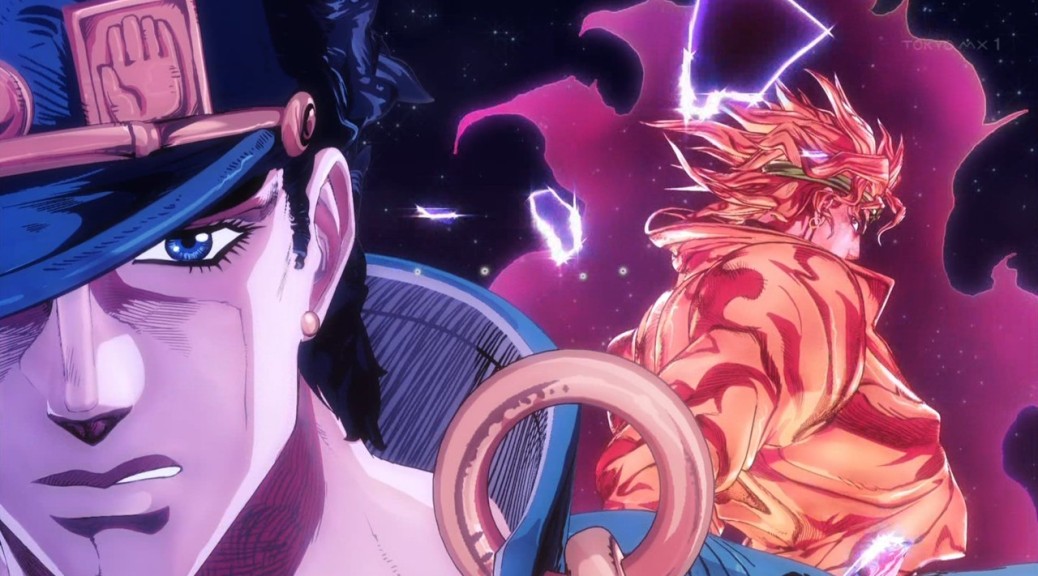 First off, don’t skip the opening.

And second, I guess that’s where the budget for this week went. Because some of DIO’s faces were a bit off.

END_OF_DOCUMENT_TOKEN_TO_BE_REPLACED

Began a Dungeons and Dragons quest with my crew of friends and my week was slightly busy. Normally, these Jojo episodes have me hype every Friday but for whatever reason, I keep posting them late in the week. But either way, we’re reaching near the end and they better end Part 3 with a teaser for Part 4. Oregairu is chugging along nicely with Yukinoshita remaining my favorite and DxD is approaching amazing levels of stupidity.

This week’s song is that of a boss that can be encountered early in the game or later in the game inside the Catacombs. Pinwheel is a deceptively easy boss with a lot of lore implications going on. Most of it involves stealing the necromantic abilities from another boss further in that area and how it was cursed with having 3 separate entities rolled up into one. To be more clear, a father, mother, and son were merged into a single creature with the 3 masks and 3 sets of arms symbolizing this. Apparently the father of this family tried to resurrect his family but failed miserably. And yes, you’re hearing “I’m so sorry” being whispered constantly. 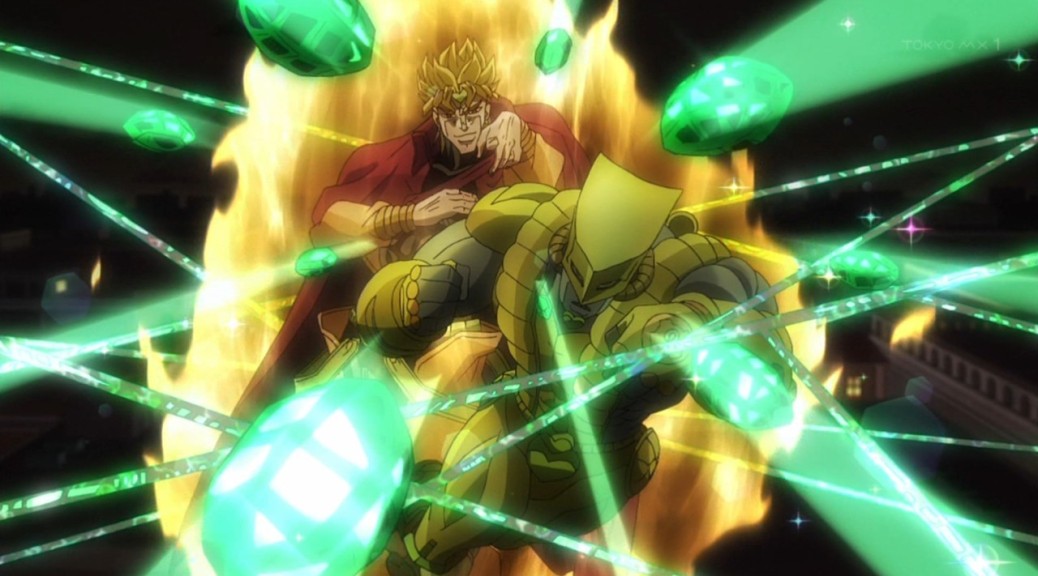 The Train has started boarding.

END_OF_DOCUMENT_TOKEN_TO_BE_REPLACED

I’m not sure how to feel

So coincidentally, Bethesda released their teaser-trailer for Fallout 4 this afternoon and if stuck with me, god knows why, for a while, you’d probably understand that I’m a big fan of the Fallout series. However, it’s been 7 years since I’ve played Fallout 3, the first open-world/FPS style entry in the series, and I’ve formed different opinions of the game since then. I still love New Vegas to death however, and I’d actually call it one of the greatest RPG’s of the decade for its story, gameplay choices, and the near ultimate freedom the game lets you approach a situation with. Fallout 3 was made by Bethesda, the new owners of the Fallout franchise after buying it from Black Isles while New Vegas on the other hand was made by Obsidian, with members of Black Isle being its crucial development members. See as how I’m not foaming from the mouth about Fallout 4 finally being announced and how I just differentiated the two studios, you can easily judge my reaction.

I barely had one.

The graphics were somewhat lackluster for me, and I’m not even that big on graphics in general. Even before the teaser-trailer dropped, I saw reports saying that the game would utilize PS3-360 graphics. That alone sullied the coming news for me and to make this news even less exciting, I saw the Washington Memorial, putting the setting back in the DC area (although I hear it’s actually set in Boston). If anything, Bethesda going back to their flawed East Coast setting is what’s really making me sad since we could have far more interesting places to visit in this next-gen craze and shed more light in post-apocalypse America.

So to match this feeling of semi-optimism knowing that Fallout 4 is coming and my dying hopes for the game because Bethesda in charge of it, here’s the theme of Dark Souls’ hubworld, Firelink Shrine. Wayward travelers and ones who were beckoned by fate rest here where they calm themselves before trekking out again into the bleak, unforgiving world to die and die again.