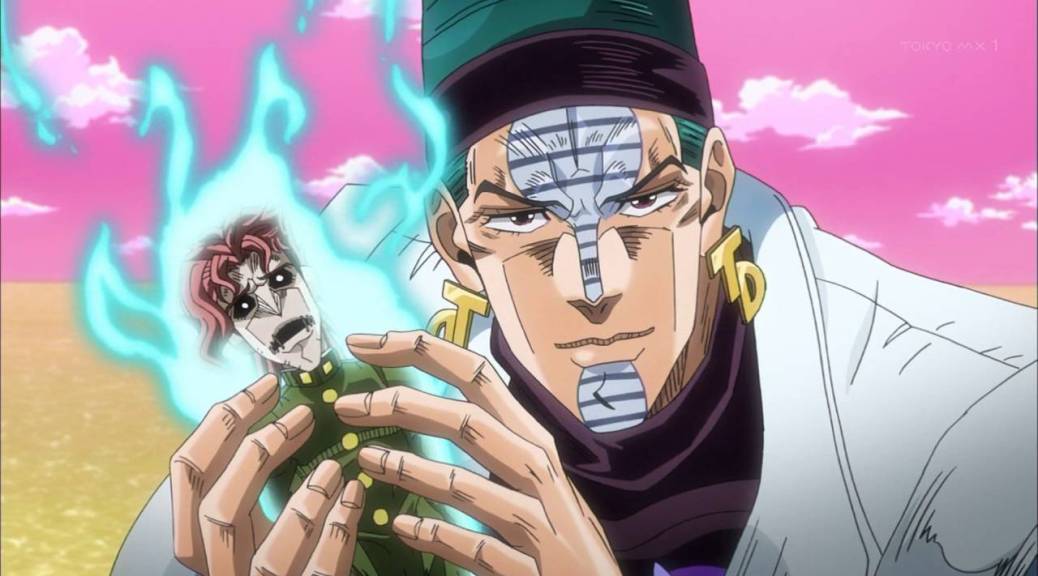 The first of the many Three-Parters to come from the final leg of our grand adventure.

Picking up immediately from the last episode, Kakyoin and D’arby’s cars emerge from the speed tunnel and the D’arby turns out to be the one in the lead. However, Kakyoin had planned this and uses the spinning maneuver to knock D’arby out of the air. Kakyoin lands safely and begins driving to the last leg. D’arby however declares his victory as he had planned Kakyoin to attempt to knock him out. D’arby reveals that he instead of landing to his doom, he landed on the farther part of the track, substantially closer to the finish. Normally, even with top speed, getting to the farther end would be impossible, but with a powerful push, D’arby was able to make it across the gap. Outskilled, Kakyoin admits defeat in his heart and Atum drags Kakyoin’s soul and places it on the doll D’arby had prepared prior.

Enraged, Jotaro steps up to the seat and challenges D’arby to a new game, baseball. D’arby accepts the challenge and the two head straight away into the playing field, with D’arby assisgning customized faces on the players representing the two Stand users. Jotaro takes a preemptive swing and Joseph realizes that this must be Jotaro’s first time playing. D’arby explains that he is not the one to take any one of his opponents lightly. Jotaro’s constantly mis-timed swings however makes D’arby uneasy but decides to keep throwing complicated throws. After two strikeouts, Jotaro’s last player gains two more strikes. However, as D’arby throws the final ball, Jotaro mutters that he finally understands how to time the swing and Jotaro knocks the ball for a homerun. Jotaro is able to repeat this 3 more times, making the 4-0. D’arby then gets serious and recounts at how skilled he is compared to his brother and how latter never once challenged him to a game.

D’arby declares his next pitch and Jotaro’s inning comes to an end and now D’arby takes his turn on the offensive side. D’arby begins to announce his batting and signals for a homerun from his player and gets consecutive hits out of Jotaro. After a while, Jotaro takes off his hat and begins to think D’arby must be cheating in some way to keep announcing his plays and making Jotaro second-guess himself. Jotaro then announces his next pitch.