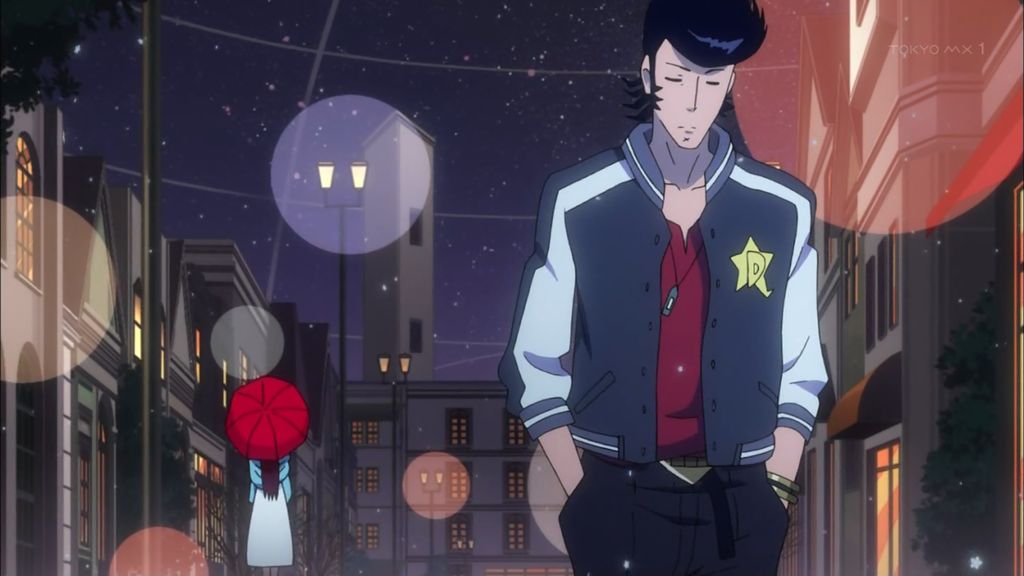 All those times I wondered why exactly Scarlet and Honey showed up in the opening alongside the main crew in the montages. I mean yes, they are the most frequently reoccurring members of the cast but they never really got the spotlight other than to be at a certain location to bring in the certain kind of humor. In both of their cases, they got slight development in the Cloudian episode but Scarlet gets her time here.

So let’s get funky with it.

Scarlet hires Dandy to act as her fake-boyfriend in order to convince her ex to stop chasing after her. Dandy wants a bigger wage for his troubles but his crew decides to sell him out after their last adventure netted them nil. The two make their way to the planet of Trendy, which sounds exactly what it sounds like. So much so that even the narrator gets into it describing the place. Anyways, Scarlet gets down to business and tells Dandy of his terms and his code of conduct for the next week.

First date takes place at a ski resort and we get a glimpse of Scarlet’s ex-boyfriend who may or may not seriously be an enormous mech. The results of Dandy and Scarlet’s ski trip however turn out to be Dandy’s lucky day when he somehow finds unregistered aliens just there on the ski mountain. The next day has the beach and while Scarlet is napping, she finds Dandy trying to hit on other girls and ruin her plans. Cue yet another rare find for the ever lucky Dandy whilst being chased down by Scarlet.

Scarlet gets annoyed by the constant work Dandy is actually putting in when he’s supposed to be out of the alien hunting job for a week. Dandy however agrees to stop capturing aliens one way or another. Another day passes and Dandy joins Scarlet up an escalator that takes people into the orbital station where they can see a particular set of fireworks go off that night. Dandy’s insistence on taking things from kids gets Scarlet annoyed once again but then they see a silhouette of Scarlet’s ex-boyfriend who thankfully isn’t a robot himself but the pilot inside who, if I heard right, is a ranking officer. Dandy walks Scarlet home and after they part, Dandy rushes into her house when she yells that there’s a spider in the bathroom. Dandy waltzes up to the bathroom after questioning why Scarlet would be afraid of anything if she works at the registration center. Turns out Nigel Thornberry-spider freaks the hell out of both of them and Dandy ends up blowing up her house.

Scarlet however laughs at the circumstances and Dandy notices her copy of a movie the two happen to like. Dandy and Scarlet then finally hit it off and their consecutive dates go exceedingly well and seem all too real. On the second to last day, Dandy and Scarlet stop by Boobies and the latter has a jealous streak seeing how friendly Dandy is to Honey.  The on their last day, the two are confronted by Dolph, the pilot of the robot and after knocking Dandy away, tells Scarlet that he knows of their plan to make him jealous. While he’s not completely wrong, Dolph turns out to be a more massive creep then previously thought but Dandy gets back up, delivers a punch, and makes a run for it with Scarlet.

Seeing that Dolph is out of his mind, the only convincing way for Scarlet to break off the one sided relationship is with a kiss. Dandy figures this out first and delivers while Dolph blasts out of the system and then later gets caught for multiple crimes. In the aftermath, Dandy and Scarlet exchange few words but end their contract with neutral terms while both have conflicting feels for one another. Both parties have trouble sleeping that night and while Scarlet goes out for a drink, Dandy decides to make chase after her and deliver something. Dandy’s heartfelt sprint across the town is proven futile as the two are unable to find each other.

It’s the type of romance we’ve seen a lot in westerns but something feels nice about it when done with character’s we’ve known for a bit. While it didn’t hit me the most, it was good for a Dandy episode.