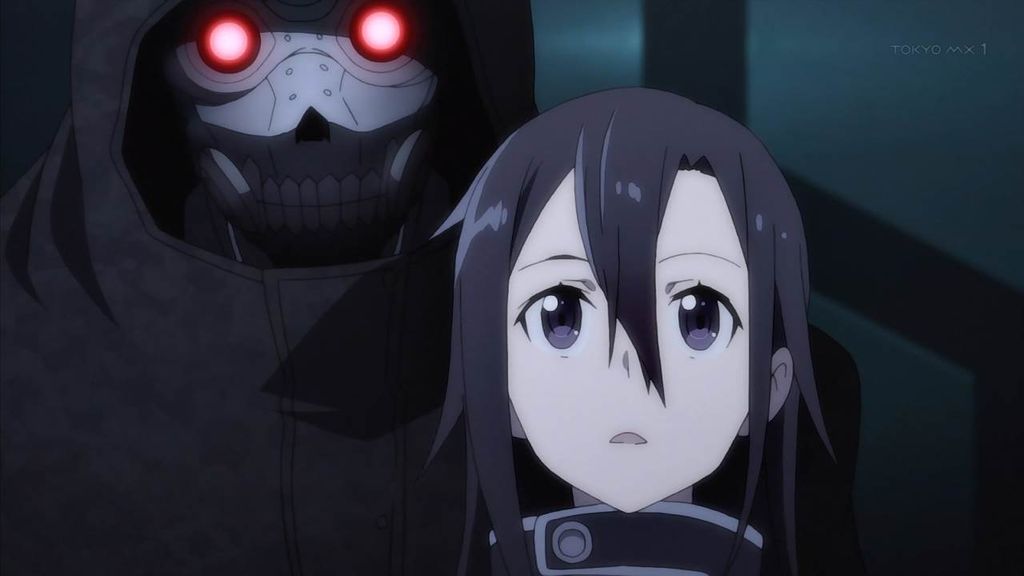 Deflecting bullets and locating where the opponent is by standing still, Kirito really got some Assassin’s Creed bleeding effect stuff working out very nicely for him.

If anything at least plot is moving forward in a decent way while the action is nevertheless going to be Kirito getting all up in everyone’s faces with a sword. I honestly have to say this could have been a lot worse but it wasn’t so props to you SAO, you aren’t as annoying and are gradually getting bearable by getting Asuna and the harem co. out of the picture.

See how nice it is not pandering by making every single person worship Kirito’s dick?

Kirito and Sinon make it to the registration building and sign up without too much hassle. Kirito notices however that real life information is requested for bigger winnings but to conceal his identity from Sinon a bit more, he does not submit any information. The two walk through the lobby with the other players readying themselves for the fight to come. Sinon laughs at how idiotic they are showing off their weapons before they fight, as if asking to get counterpicked. Sinon advises Kirito to ready himself as well and she begins to undress. Kirito realizes this and apologizes for fooling her and presents to her his ID.

After a slap, Kirito follows the angry Sinon around while the later wishes he would get the idea. She finally settles down but her friendly demeanor is understandably gone. She decides to tell him the bare basics of how things work and lays down the set up of the 1 vs 1 matches. Random areas, random obstructions, but 1 vs 1’s until the brackets are done and the qualifiers are held. Whilst explaining, Sinon’s friend from the previous episode shows up and says he wanted to watch her fight.  Kirito teases the two for a bit and is then called to his fight.

A grassy field littered with some pillars is Kirito’s battlefield and he’s instantly introduced to automatic weapons. Kirito takes a few hits and hides behind to pillar and thinks over if he will be able to close in for the kill if he can somehow deflect the bullets. Realizing he’s the main character, Kirito activates his Mace Windu lightsaber and charges forth after catching the opponent trying to relocate while crawling. Bullets get fire but Kirito effortlessly deflects them all and drives his blade into the opponent.

With his first match won, Kirito is teleported back to the lobby and finds Sinon’s friend watching the screens overhead. Kirito tries to locate her as well but then Death Gun of all people (and names) pops up behind him and asks if Kirito is the “real deal”. Kirito is puzzled but after being eerily asked multiple times and being shown Kirito’s own ID, he realizes that Death Gun is someone that recognizes him from SAO. Death Gun was a survivor and has recognized Kirito’s ability and name and questions if he’s real or not. Kirito is absolutely horrified about the situation but the fear amps up when he sees the Player killing guild Laughing Coffin’s tattoo on Death Gun’s wrist.

They could have done a lot worse in my opinion. They didn’t fail too hard with Kirito’s gender reveal so I guess that’s a plus. There’s definitely plot going around since these characters aren’t helplessly lusting after Kirito or being completely predictable. Decent episode.