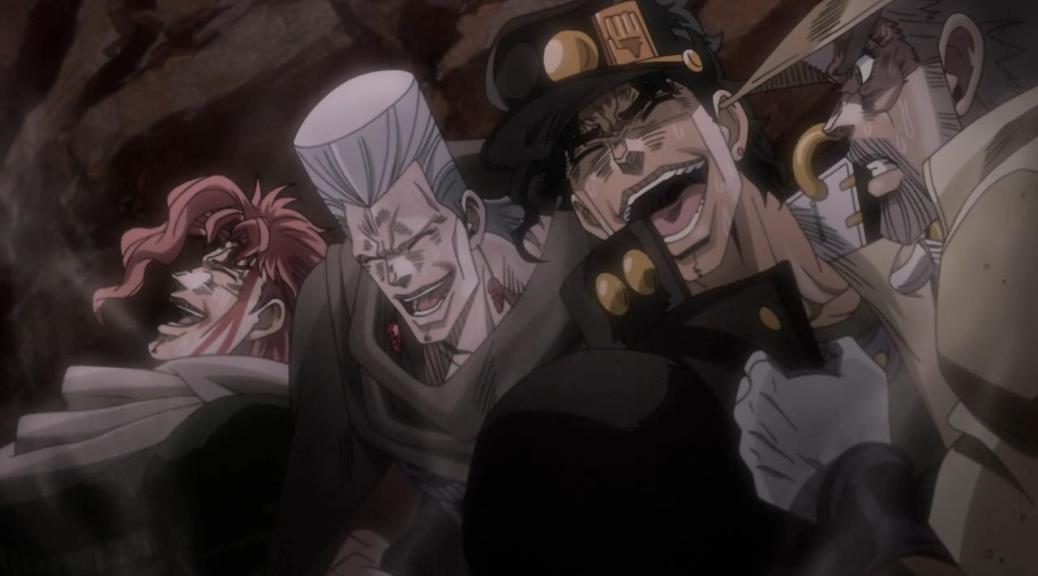 They actually did it. They managed to fit the joke fight of Part 3 that lasted 2 chapters in the manga into a full-fledged episode. I honestly didn’t think they could pull it off. Hats off to you David Productions. You actually managed to pull one of the things I honestly thought would be somewhat impossible. What a way to do an episode preview too, Mannish Boy seems even more terrifying and disturbing with next week’s fight.

Short talk for a short fight

But first, a whole episode on THE SUN

The crew arrive in the United Arab Emirates and Joseph buys a rather expensive car to help them traverse the desert. The crew notices the rather luxurious style of the country and Joseph gives us a brief lesson on how the UAE citizens were able to become so rich. Joseph plots out a route for them to get to Egypt which consists of them ditching the car shortly for camels to directly cross the Saudi Arabian desert to bring them faster to Egypt. After that, Joseph plans to get them a private plane to fly to Egypt. Jotaro expresses concern over trusting Joseph with yet another plane ride but they continue.

Joseph trades in the expensive car for four camels and poorly demonstrates how to get on one. After much antics, Joseph and crew are able to mount and begin their travels. Traversing the hot desert is a tough feat alone but the crew feel something off, as if someone were watching them. Joseph feels that the heat is getting to everybody and decides that they should prepare a camp before continuing. He takes out his watch and is alarmed to see that it is 8:10. The crew then realize the rising temperature is in fact the work of an enemy Stand that takes the shape of the sun and they hop to cover behind some rocks.

They observe the camels fainting and a scorpion melt and Kakyoin decides to scout out the area. An Emerald Splash targeted toward the sun in the sky but is answered back by some heated projectiles shot back at them. Seeing as how they won’t be safe, Jotaro uses Star Platinum to punch a little cave in formation for them to hide under.

Everybody begins to panic when the binoculars and water canteen get blasted as soon as it got out of the shadows of the cave. Joseph thinks to himself that its time for him to shine using his experiences of fighting tougher foes but is unable to find a flaw within the enemy Stand. Kakyoin starts laughing and creepily enough Jotaro follows. Polnareff begins to laugh too and Joseph is horrified to see everyone gone insane by heat. However, Kakyoin and Jotaro gleefully explain to Joseph that the entire landscape seemed mirrored to each other. They point a rock with another similar rock with the same shadow beneath the sun and Jotaro throws a rock at one of them. Like a glass panel, the space around the rock shatters and it turns out that the Sun’s user was hiding behind a mirror wall complete with comfy chair, beverage, and air conditioning.

2 thoughts on “Jojo’s Bizarre Adventure Part 3: Stardust Crusaders Episode 18- They did it”