One the less memorable fights in my opinion becomes a pretty entertaining episode.

I was genuinely surprised at they handled this, I had no idea the fight was this fun back when I read Part 3. Some people still consider it a lesser fight but nonetheless, it’s exciting to see it in animated form. I really need to stop reviewing the episode before I even talk about it. We’re around 2-4 Stands away from reaching the halfway point of the series. Did you think getting to Eygpt was tough? Wait til you all see the Egyptian God Stand users.

Oh by the way, have some Jotaro laughing 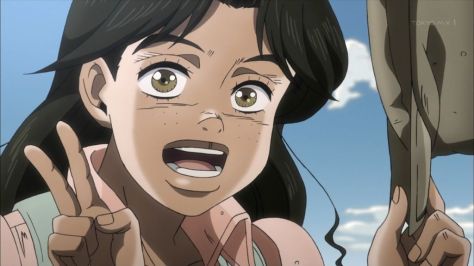 Following the ending from last episode, the mysterious car trails the Joestar crew as they traverse India to reach Pakistan. While on the road, they see a hitchhiker and it turns out to be Anne, the runaway girl back in Singapore. He’s lifted for a ride but only with intentions that they will put her on a plane back home once they reach their destination. Onroad however, they encounter the mysterious car and Polnareff gets to disrespecting it before some shenanigans begin to happen. After letting the car pass, Polnareff is signaled by the driver to pass by him. Polnareff does so but is immediately met by a truck heading straight for the car. Star Platinum punchs the truck hard enough to save the crew an untimely death.

The crew make it a rest stop in the middle of the road and decide to recuperate from the accident. Joseph orders a drink but from the reflection of the glass, he spots the car that lead them to the truck crash. Suspecting that the enemy Stand user or plain asshole is in the bar with them they decide to beat everyone up to make sure. Kakyoin is the only one that doesn’t join in the beatdown but then they all see a muscular man get back into the car in question.

The enemy car speeds through the road and hits the signs pointing toward Pakistan toward the other direction. The Joestar crew follow him through the wrong path. Driving quickly up the cliffside, they turn the corner and find the enemy car not present and only find a cliff. Polnareff slams the breaks and the crew is safe. They look around the area and conclude that somehow, the car has vanished. Suddenly the car appears from behind and begins to push the crew off the cliff. The entire crew panics but Polnareff, the driver handling the breaks opts to abandon ship. Kakyoin points this out and Polarneff apologizes for the miscalculation. Either way, the cars falls down the cliff.

Kakyoin summons his Hierophant Green but Joseph warns that HG’s strength is nowhere near enough to hold on to the car if it manages to hang on to the cliff. Kakyoin however had grabbed a hook and connects the car to the their enemy’s. Jotaro then follows suit and uses Star Platinum to launch their car while letting the enemy car to topple off the cliff. The crew thinks over on how the car got behind them but the ground starts shaking and they abandon the car. From beneath the cliff, the enemy cars appears from beneath the ground and the Joestar crew car falls down the cliff.

The crew conclude that the car itself is the Stand and Jotaro decides to test if its strength can match his Star Platinum. The car however changes form and adds spikes to its hull and wheels and charges foward, revealing itself as the Wheel of Fortune. Joseph warns Jotaro about engaging a Stand they know nothing of and exactly as Joseph says, the Wheel of Fortune fires something from its hull and Jotaro is shot in the shoulders. Kakyoin and Polnareff come to assist but they are shot as well. The crew decides to make a run for it and then climbs up another cliff.

Seeing how the car can navigate itself up cliff walls, Jotaro decides to take the opening chance to attack when the car reaches the top and leave its underside of the car open. The WoF reaches the top but it questions if the Joestar crew realize what they’ve been shot with. Kakyoin realizes that it is gasoline but WoF launches a spark toward Jotaro and he goes up in flames.

Zizi, the WoF user exclaims that he has ended Part 3 early but is immediately responded by Jotaro. He had used his jacket to imitiate the burning effect while he had used his Star Platinum to go beneath the ground. Star Platinum lets loose ORA ORA ORA and punches the side of the car enough to throw Zizi off. Zizi is revealed to have only extremely muscular arms while having nothing else be notable of praise. The crew takes a few chances to get a good laugh out and takes the Stand-powered less Wheel of Fortune to their next desetination. Zizi is tied to a rock has a sign that discourages from freeing him from his chains.

Enya grieves extremely hard for the loss of her son and cries even harder at how the Stand users she has sent have all been defeated. She decides to take matters in her own hands and prepares to face the Joestar crew with her Stand, Justice.

Like I said, the visuals in this episode really help accentuate Wheel of Fortune’s power and speed. In the manga, it wasn’t the most memorable fight other than the notable “I ended Part III early!” line. Seeing as how we don’t formally see the enemy Stand in the episode preview, I think I can safely say that Justice will be around 2 episodes.