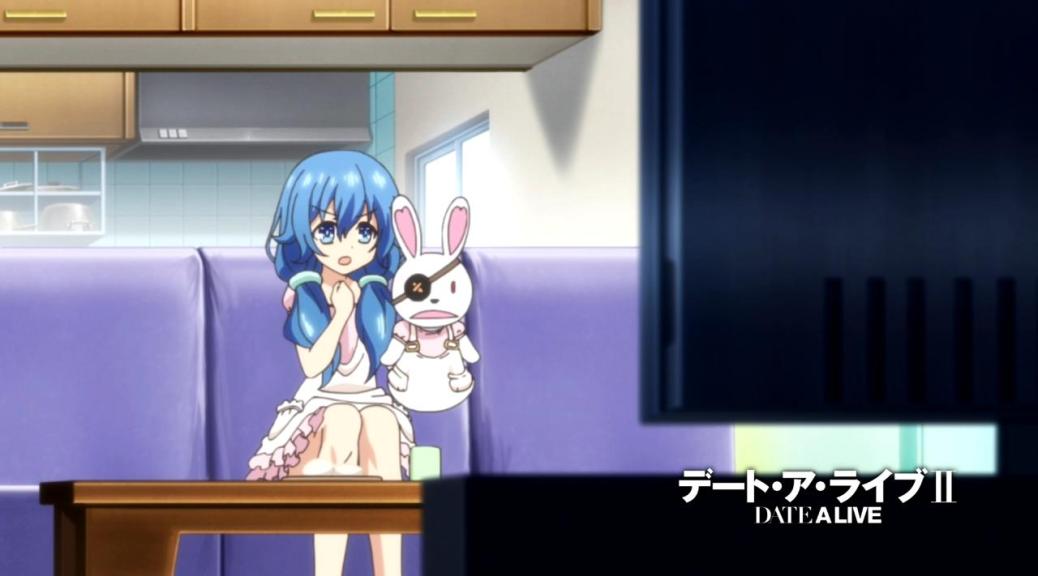 I mentioned before that I really didn’t need to go over a recap/filler episode so I consider this to be the real start of the Date A Live for this season.

What can I say, Date A Live has my enormously biased opinion because I worship the artist Tsunako and her character designs. Its story isn’t anything new but just for the pure reason of liking the way everybody looks is the reason I love it. While it’s a shallow reason, the series has grown on me immensely during the time I had fawning over its art.

So the first season left off pretty nicely at the end of Volume 4 and now we return to Volume 5.

Looking back at this post now, I amaze myself how I can drag out such a simple series with my typing.

Before I go into what happened, I have to give some credit to the opening. The first one was alright but I honestly didn’t care for the vocals when compared to the instrumental/orchestra in the background. Now the opening for the second season is pretty good in my opinion. More nice instrumentals in the back with a superior video to show off literally everyone in the series (excluding stuff past volume 7) does both my ears and eyes good.

We return to the self-aware harem crew in a new arc. I really don’t feel like anybody needs a recap since an entire week was wasted on one. Basically, no one has changed their attitudes/goals from last time. The new arc brings us a temporary new setting as the class takes a trip to Okinawa. Sorry Yoshino fans (namely Light but he already read the novels), other than brief scenes here and there we don’t get to see her this arc. Anyways, while the destination was Okinawa, a travel agency hooks up a better deal with the school and they are to spend vacation on a different resort. Ignoring Tohka’s antics to try and be in the same room as Shido, Reine has concerns over the issue as the travel agency is affiliated with DEM, the company that runs the whole AST thing going on.

Of course, her suspiscions are completely right as we got Ellen Mira  Mathers, the alleged: Most powerful Wizard in the world (AKA: Spirit killer) acting as a photographer informing her employers of what’s going on. But keeping things too serious would be detrimental and we got the girl trio on harassing her every step of the way.

Directly affected by Ellen’s constant photography, Tohka runs off on her own and Shido gives chase. Just as that happens, a storm brews over the island and we are given introduction to the spirit to be romanced for this arc. However, Shido had had a three-out-of-four track record but never has he had to deal with TWO spirits at once. Enter Kaguya and Yuzuru, twin Spirits who are quarreling for god knows why and have been causing weather incidents for quite some time. Kaguya is the chunni one while Yuzuru talks like a Misaka clone (I fail to understand why Misaka is so loved though). Shido stops their fight and they take interest in his persistence and they promptly decide that whoever seduces him shall be victorious in their game.

Shido returns with the unconscious Tohka, who passed out after taking three garbage cans to the face during the storm, with the twin spirits clinging to him. Reine covers the formalities with the students while taking note of them being spirits later on with Shido. A brief explanation is given to Shido regarding their fighting. Originally, Kaguya and Yuzuru were a single entity known as Yamai but somehow two personalities formed out of the single mind. To prove whoever is superior has the right to bear the name Yamai, they’ve been competing in all manners of contests to see who reigns supreme. Shido just happens to be the 100th match and seducing just happens to be something they haven’t done yet.

Cue antics in the hot springs with the twins and Shido with Tohka joining in. The entire scene looks extremely similar to Nisekoi but what else can a guy do trapped in a girl’s hot spring. Thankfully Date A Live doesn’t need to be tied down with regular tropes as much since Shido ends up jumping off the cliff down to the sea to escape.

Ellen then contacts command to initiate “the plan”.

Pretty good adaptation in my opinion. Expect even more fanservice next week while the arc concludes in Episode 4 becaue we need all the time we got on the bigger arc when adapting Volumes 6-7.