I’m telling you, no other week seemed THIS lengthy. The week wasn’t really filled with too many things to do but by god, I cannot imagine a busy week while waiting for new episodes. As you can tell, I’m unfortunately going to suffer from this mental drawback of waiting every week for new episodes but…damn.

Enough talk though, let’s finally begin the most iconic saga in the entirety of Jojo’s Bizarre Adventure.

Skip 4 years and enter the girl who was next to Joseph in Part 2’s epilogue. Meet Holly Joestar, daughter of Joseph and Suzie Q, who apparently married a Japanese jazz musician (great tastes, girl) named Kujo Sadao. Holly is currently at the police station nearing news of her beloved sons actions. Apparently, he brutally sent a few thugs to the hospital and forced himself into a holding cell on the grounds of being “possessed”.

Before we see Holly’s attempt to liberate her son, she rethinks over her memories with him. It’s all sweet until we finally get there.

Kujo Jotaro. The man, the badass, the legend. 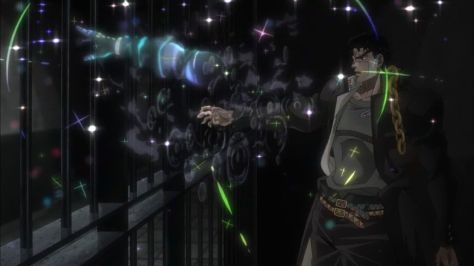 Well, either with his mother here, Jotaro insists that he stays inside. The possession is so dangerous that the inmates locked in with him are scared to hell. To demonstrate, Jotaro uses the “ghost” to take a gun from the officer’s hands and shoots himself. The bullet is simply caught in the air.

Later that day, Holly reunites with the one and only Joseph Joestar. Joseph assures that he can solve the problem. With a single motion, he signals another figure at the airport to come with him. We’re instantly back at the holding cell with Jotaro chilling around with books and remote cars. Joseph enters the scene and demands that Jotaro walks out. Jotaro once again refuses and snaps off Joseph’s artifical pinky finger as a warning.

Joseph introduces Jotaro to Avdol, a man who also is “possessed”. Joseph tells Avdol to remove Jotaro from the cell and Avdol complies.

Jotaro bears witness to Avdol’s “evil spirit” Magician’s Red and is quickly propped up against the wall. The police officers are confused as they see Jotaro just smashed to the wall while the thermometer pumps up. Jotaro however gathers enough anger and his “evil spirit” is brought out.

The vision quickly strangles Magician’s Red and the physical status is transferred to Avdol as well. Avdol warns Joseph that Jotaro might end up at a hospital if Avdol got serious. Magician’s Red binds Jotaro with flames and Joseph explains that as the spirit stands with you, it is to be called A STAND. Jotaro kicks a desk to break the toliet and frees himself and breaks open the cell doors. With a piece of a metal bar in hand, his Stand readies itself to skewer Magician’s Red

That is of course, if Avdol didn’t promptly turn his back away from the fight. Joseph mosies on the situation to a local diner to explain the situation. Long story short, Joseph knows that the coffin found a fews years earlier contained a dangerous man that threatnens the world. To directly tie this to the family even harder, Joseph showcases his Stand to take a photo of far away objects. This reveals that Dio is indeed alive and has a star birthmark on his neck. Joseph concludes that Dio had taken control over the body of Jonathan Joestar and must be destroyed. Only problem being is that they have no idea where he is.

But for now, it was a long day and the group return to Jotaro’s home. However, DIO himself notices that he has been watched from a far away location.

You know what the worst part about this is? The days before this aired seemed like the longest days of the year. Now this is going to apply every week until the next 25 weeks are up. Plus, no opening or ending first episode either. So double the hype folks, we get to see Kakyoin the milf hunter and hear our opening and ending. Also want to point out the small plothole with the whole coffin thing. Recall that Erina used the coffin to escape the boat but I guess DIO had a spare for he can breathe in water and just dragged himself to where the coffin sunk. 100 years is a damn long time. Plus, now everyone understands why Joseph had thorny vines in Bloody Stream. I think I’ve already mentioned this but I love the new voice actors for Joseph and Avdol. Sugita sounded too forced with Old Joseph while the new Avdol looks older than the ASB one and has an older sounding voce accompanying it.

GET HYPED FOR KAKYOIN