This is how I felt Episode 8 should have been done. However, lack of Dr. Gel and Bea leaves something wanting but I found this episode enjoyable nonetheless.

I’m also hooked to the song they used for the Toonami ending. It’s definitely in the show’s soundtrack so I’m awaiting March 25th with bated breath. Speaking of Toonami’s ending, I just noticed the mech from Episode 1 pull a Terminator 2. Anyways back to Episode 9.

It was also the perfect episode to experience while tripping.

We join the Aloha Oe crew on a trip to a strange planet where a single alien seems to be inhabiting. QT goads that while everyone else does their thing, she has fixed the instant teleporter and Dandy and Meow board it to make planet side. In exchange for a 50% faster travel, QT has mistakenly forgotten to tell them that the accuracy has stooped as well.

Dandy falls admist the more advanced colony of planet organisms while Meow finds himself being fed a large amount of food by a comparitvely lesser kind of plants. Dandy is introduced to the native “smart” plants that make up 1 of 18 plant “states” after their strange evolution caused them to obtain sapience. Dandy is with the Vegims, the higher group of plants and is treated nicely as a guest. He meets the head plant doctor’s infant daughter 033H who befriends Dandy and he questions her of Code D and she is apparently aware of its location. The doctor states that Code D’s effects on plants were the origins of their intelligence but it constant exposure engorge for possibly lethal effects. Since Dandy is human, everyone travels to Code D so Dandy may do what he needs to do.

Cue some trippy scenes that really speak volumes of this episodes design and music. 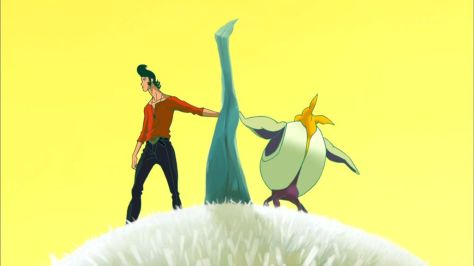 Near the northern side of the planet, Dandy and plant co. are confronted by another big plant named Cocamuka. He imprisons the crew but they get out as 033H and another plant had escaped beforehand. Turns out that Cocamuka and our friendly big plant were part of a research team on Code D but the former realized it wasn’t the healthiest option for everyone while Cocamuka predictably wanted more of it.

We arrive at a purple nebula of mass and Dandy goes in with 033H following him. She grows a bit too much and gets stuck on the way and Dandy continues on toward the main chamber to find out that Code D is like colorful stone artifact. Dandy attempts to remove it but then all the purple objects amass toward it to stop its removal. Code D collapses from the weight of the other “cells” and then all the communities rupture.

Dandy stands amongst a field with his comrade plants slowly devolving into regular, speechless plants. The good doctor says that this is for the best and that this is not and end, but a beginning. 033H says goodbye, and Dandy stands alone.

Back on the Aloha Oe, Meow is still fat and Dandy is displeased with the experience. He’s also quite fed up with plants, but a fruit drops from the ceiling decorations. 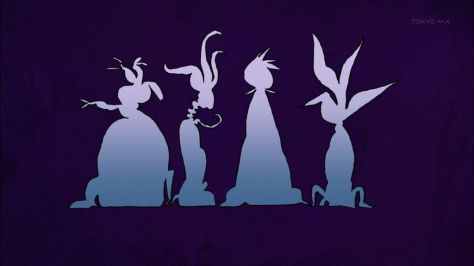 As I said above, I found this episode to be a bit more feelsy as how everything “ended” for the characters at the final scene. I had an episode legnth time for me to get a bit attached and I felt something when they left. Now was the episode somewhat eventful? Well a lot of it was extreme tripping out with the music and scenery so I label it as the “artistic style” episode where atmosphere legitimately oozed out. In terms of what the episode stood for….I could probably say something about “dependency” and evolution. Overall, a decent episode.

People surmise next episode might be like Hard Luck Woman and leave Meow behind and then end with Dandy and QT meeting eachother. That’s okay and all but: What about everybody freakin else promised in the opening? Need that season 2 for actual development maybe please?