While I’m writing like 3 other posts, I decided I want to talk about Jojo in the week I have left before classes resume and the busiest part of life awaits me. Once that’s over with though, it’s just gonna be playing games, hanging out, and making money. But enough about future plans, let’s talk about the future of Jojo’s Bizarre Adventure the Animation.

I will be quickly talking about Part 1 and 2 while the majority of this talk will be about everything else after it, let’s get to it

You can already learn from my posts covering the anime that I absolutely LOVED Parts 1 and 2’s adaptation. While they are a bit weak compared to the other parts in the series, seeing how much voice and hype go into such a series gives me hope. Part 1 and 2 were able to fit into the regular 26 episode timeslot thanks to its length, but that reason is something of concern when it comes to talking about future adaptations of other Jojo parts.

Part 1 was 5 volumes while Part 2 was 7. Simple math application tells us thats 12 volumes. Truthfully speaking, Hamon battles were to be ended quickly because it happens to be a very lethal effect on Part 1 and 2’s enemy. Speaking of enemies, let’s count the enemies in those parts. Part 1 had Dio, Bruford and Tarkus, and mindless zombies. Part 2 had Santana, Wham, ACDC, and Cars. Because of this rather low number of enemies, the series didn’t tend to take too long.

With the introduction of Stands in Part 3 and onwards, we have huge growth in enemy numbers and abilities. In volumes, Part 3 alone has 16, Part 4 with 18, Part 5 with 17, Part 6 with 17, and just because Steel Ball Run kicks so much ass, I’ll include that info too, it has 24.

The lengths definitely provide a big challenge to David Productions (if they’re going to be the ones handling the series again) since the obvious increase in volumes and story elements will prove a much harder time to adapt. I don’t think any Jojo from this point can be fit inside a regular airing schedule like the ones we see in seasonal releases. An attempt in the early 90’s had the Part 3 OVA that had cut an extremely large chunk of Part 3, cutting away its humor (yes people, Jotaro CAN laugh and show emotions) and fabulosity.

So lets compare that to the formula in Part 1-2: Beginning—Primary Antagonists introduced—Training—Elimation of Enemies—Final Boss 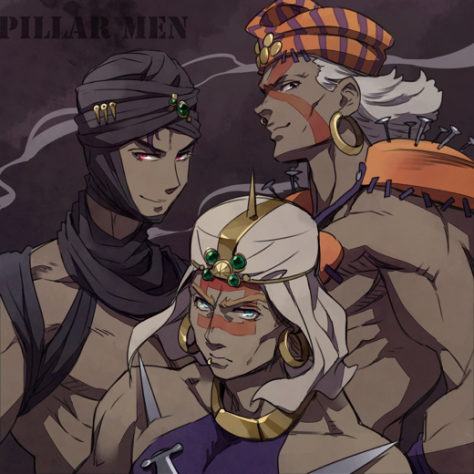 If anything, the series starting off from Part 3 should be one of those series that just keeps going until its over, examples include Fairy Tail (in a sense), One Piece, Naruto, Bleach, Gintama, etc.  This adaptation of Jojo should primarily stop at Part 6 since well….you know. However this does mean something new must be done to ever adapt Araki’s magnum opus, Steel Ball Run, but by the time the animation ever reaches that far, Jojolion should be at its close.

Other than those two keeping constant, I can’t wait for the amount of fights we’re in store for.

Just because I’m in the mood for more Jojo, I might update in the next few days/weeks on potential lists. Topics include, non-main villains, fights, moments outside of fights, and Stands. Characters mentioned once have a very low possibility of showing up again.