So far, I’m not regretting my picks for this season. My friend did recommend me Gargantia so I’ll probably check that out sooner or later…or just watch it and review at the end of the season. Whatever, let’s just move on to watching everyone’s favorite recluse

Gym class features tennis for Hikigaya’s class and he pulls his perfected lines to his coach to avoid pairing up with someone and just go against the dreaded wall. Hikigaya can only stare in contempt toward his classmates partaking in joyous sport while he willinginly contemplates some deep thought while fighting against himself. 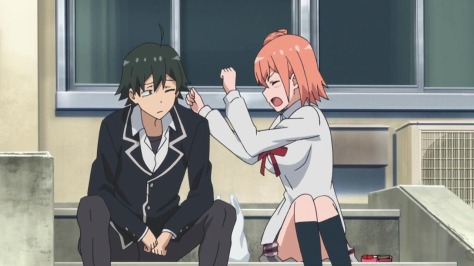 During lunch, Hikigaya goes out to his “happy place” where the shoreline winds fluctuate back and forth. His inner peace is interrupted by Yui who joins him while she was on an errand to buy drinks. Yui goes off about inside jokes and stories while Hikigaya only seems to favor infighting between friends. Yui confuses Hikigaya and Yukino’s quips as “in-jokes”. Subtle and unintentional insults are stopped when Yui suddently switches topics to the first day of school. Hikigaya states that he got into a car accident that day and does not remember it. Before Yui can go off on that, we are introduced to Totsuka Saika. Saika admires the skills Hikigaya has taught himself over years of isolation in tennis and wishes to improve himself.

Hikigaya is requested by Saika to be tennis partners for gym and Saika sincerely impressed by our uninterested protagonist. Saika requests that Hikigaya joins the tennis club to help them out. Hikigaya relays this to Yukino who finds no fruit to be harvested from this endeavor. She only provides words of discouragement, saying that the tennis team would only unite to just go against Hikigaya and not actually improve themselves. Yukino sources herself with a story of when she studied abroad and came back to Japan. The other girls spent too much time insulting her that they didn’t focus on their grades and performances.

Grudges aside, Yui enters the clubroom with Saika with her. Saika requests help with the tennis team and the resulting action ends up with improving himself. Yui and Hikigaya help train him while Yukino eventually leaves. More practicing garners the attention of the classes popular bunch and they wish to have themselves a game. The male star of the class Hayama tries to find a middleground between everyone but Hikigaya’s condemning words and the impatience in the popular group ends up with a match between Yui and Hikigaya against Yumiko and Hayama.

Yumiko’s ego however happens to match her skills in tennis though. So much that Yui has a hard time keeping up and gets herself hurt. Yui leaves with a plan but Hikigaya prepares to throw away his non-existant dignity to beg the kids to leave the court. Yukino is brought to the scene before the pity party starts and enters the game. Yukino demolishes the other team but her stamina is heavily drained by the game point. The game is tied and Yukino asks Hikigaya to serve the ball. Utilizing the wind patterns he has learned since his life of anti-social highschool life began, Hikigaya sends an easy looking serving to Hayama, only to have it swerve and gain a point. Hikigaya serves once more but Yumiko tries to get the winning serve and Hayama stops her from crashing into the fence. Victory is for our duo, but the crowd cheers for Hayama’s actions. 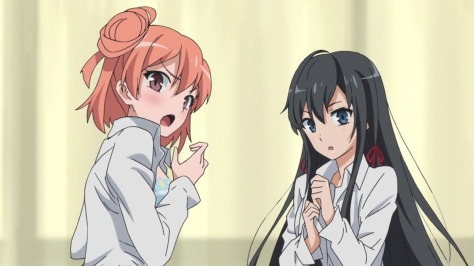 Saika thanks Hikigaya instead of the girls who basically did 99% of the work and the latter see’s something very wrong with the situation with the girls getting closer to girls while the highly feminine boy gets closer to the guy. That situation is immediately solved when Hikigaya walks into the girls changing, and recieves a tennis racket to the head, all is right with the highschool love comedy world.

Hikigaya’s little sister Komachi is anything but what Hikigaya is. While the reclusive big brother sees life as a cup half empty, the little sister is happy and carefree. Komachi brings up the topic of the first day of school and Hikigaya remembers the moment when he saved a dog from a car and got hospitalized. Komachi mentions the owner of the saved dog came by a while ago and dropped off food but forgot to tell him. Further attempts to see if his sister got any information about the dog’s owner proves naught. 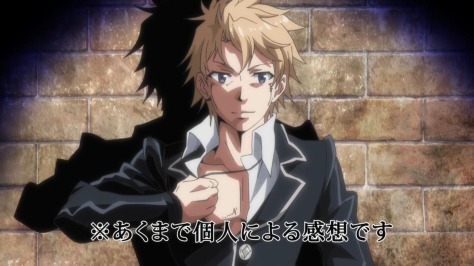 Hikigaya attempts to weasel himself out of participating in the class’s field trip but the instructor once again shoots his efforts down. He returns to the club room and Yui enters after him after mentioning that she was looking for him the whole time. To avoid more screw-ups, Yui exchanges numbers with Hikigaya while the latter tells the tale of his middle school attempts to socialize. Anyways, Yui also mentions the string of texts incriminating 3 particular male students in their class. While Yukino’s harsh words fall down upon Hikigaya, Hayama enters the clubroom to discuss the very set of texts that are ruining his friends’ reputations. The suspect’s motives are narrowed down to the field trips that limit a group to 3 people, and judging from the text message’s subjects, it boils down to the three guys in the messages. Hayato describes each of them in noble light, but Yukino only sees scumbags. Yui and Hikigaya are dispatched to find the culprit. 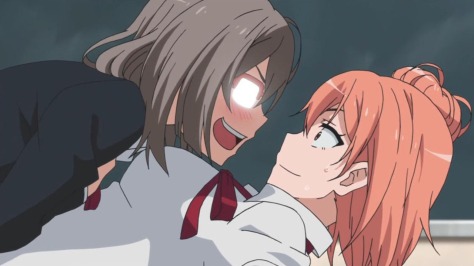 Yui’s methods of trying to incite a gossip-like conversation is shot down by the other girls particularly the secret fujoshi in the class. Hikigaya commences his observation skills to see if anything is up with the three guys with Hayama. The four guys including Hayama seem like a motley crew of inseperable “bro’s” that joke around and laugh with eachother. Further analysis is interrupted by Saika showing up. Hayama approaches Hikigaya and asks if he found anything out. Hikigaya’s results value at nothing but he looks past Hayama and see’s the other 3 guys on their phones, not even saying a word to another. So the problem becomes clear, it’s somewhat Hayama’s fault Hayama removes himself from those 3 to make eachother good friends. He thanks Hikigaya for helping and wants him to join the field trip group. Saika also joins in on this and they got themselves a group, but they are quickly swarmed by the girls wanting to follow Hayama around for the trip.

Well with one pretty girl, one cute girl, a chuunibyou, and a sociopath, why not add a trap in the hilarity? Totsuka’s unintentional charm is so strong that even Hikigaya can’t seem to remind himself that he’s a guy. Hikigaya’s complete disregard for social activity actually helps him this time around to gain a win but not gain any sort of commendation except from mentioned trap. Episode 4 brought us a new member or just solved a regular problem, Hikigaya’s sister also provides an interesting contrast with her brother. Hikigaya’s social inactivity also helps at identifying everything wrong with friendships as well and after winning over Hayato’s trust, it’s like the breakfast club in the clubroom if Hayato does become a member.