A few months ago, I posted a piece detailing one episode from Futurama that really touched many peoples’ hearts. I mentioned in that post that I had one more from the same series that I wished to talk about (at this given point). Because of my busy schedule earlier this week, I was not able to post it on the day it was aired (March 11th) but it’s better late than never.

Today, allow me to tell you the great pieces of Western animation through the 10th episode of its 3rd season, The Luck of the Fryrish.

I’ve mentioned beforehand that the show is mostly not-serious for a majority of its episodes. This episode starts out with some humorous tones but gets more emotional at the ending minutes. Allow me to elaborate with its summary and some background info (now in reversed order). Interesting (or rather obvious) to note that both episodes have to do with one common thing, Fry’s past.

Our main character Philip J Fry comes from a family for 4 back in New York. Yancy Fry Senior, Mrs. Fry, Yancy Fry, and then Philip Fry being the order of the household. The episode begins with the birth of Fry and his brother Yancy complaining how he gets the name Philip while he gets Yancy. Back in the present, Fry’s bet goes awry on a horsebetting  and later gets some tough luck given to him in form of losing a dollar, getting hit by lightning while trying to retrieve said dollar, and falling in a trash bin when a local cook throws out his leftovers. Back in the past, Fry recounts how a basketball game against his brother. Yancy is defeating him but in a nearby patch of clovers, Fry finds himself a seven-leaf clover and he puts on his wristband and ends up winning the game. He recounts this story of his lucky charm back to the gang at Planet Express and voices his conviction to retrieve it. 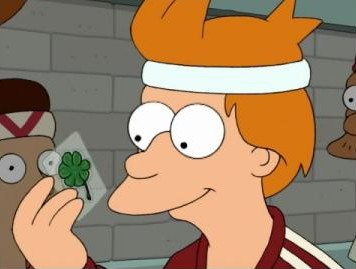 Fry, Bender, and Leela venture into the underground ruins of New (Old) York as we delve back into Fry’s past once more. Fry and Yancy enter tryouts to join a breakdancing youth gang. Fry pops some moves and Yancy follows up with his brother with some obviously rehashed moves. Fry calls his brother out on how he steals everything he does and attempts a move that he cannot mimic. Fry pulls off 7 spins on a single headspin motion and Yancy is unable to steal it. Yancy tries to take the lucky clover and Fry takes off. In the present, we have Bender transporting our trio around the neighborhood on train tracks and they arrive at the run down Fry Household. We return to the past where Fry runs downstairs to his father’s bombshelter to hide his clover inside a small safe. He hides the clover within the album cover for the Breakfast Club, locks the small vault and heads upstairs.

Fry shows his friends the very same vault he used and tries to remember to lock combo, but is unable to get anywhere due to the hinges being busted. Bender is able to open it for them and much to Fry’s suprise, the clover is not there and he knows in his heart that his brother is responsible. The trio head back outside and walk along to street, only to find a gargantuan monument (with clover insignia) dedicated to someone who looks exactly like Yancy. The inscription however, describes the not Yancy but Philip J. Fry. Fry is outraged that his brother has not taken only his clover but his own name. Bender points out that he was also the first man on Mars, which only fuels Fry’s anger.

Back at Planet Express, Fry is given some light on who this “imposter” is as the Professor pulls up a biography of the Philip J. Fry. He is depicted as a successful rockstar, millionaire, and astronaut that is now buried in the Oribiting Cemetary up in space. The scene shifts back into the past when Yancy is preparing for his wedding and reminisces with his family about his brother’s disappearance. He heads downstairs to find something to play at the wedding reception and finds a Fry’s drawing of him on  spaceship. Then Yancy opens the small vault to open up the Breakfast Club album, only to find the clover with it.

In the future, the trio enter the garden cemetary and start uncovering the grave. Fry hits the moss covering the gravestone and begins reading the faded inscription. We take one last look into the past as Yancy and his wife decide on a name for their baby. Yancy states that he has one on his mind, but is not completely sure. He takes up his son and presents to him the 7 leaf clover, saying that it once belonged to “Someone very special”. His wife gets the hint at who Yancy wants to name their son and says she agrees with him. Yancy is enthralled and goes:

“Son, I’m naming you Philip J. Fry, in honor of my little brother…who I miss everyday. I love you Philip…and I always will”.

As Yancy’s words rings through time, he looks upon the drawing of the rocketship his beloved brother had drew so many years ago. Fry finishes the inscription upon the grave:

“Here lies Philip J. Fry. Named for his Uncle. To carry on his spirit.”

Fry remains silent as Bender gleefully announces that he has found the clover and a wedding ring. Fry walks up and takes the clover, and looks at it one more time. Leela reads the situation and hushes Bender up and they decide to go rob some other grave. Fry with tears in his eyes, smiles and drops the clover inside the grave.

The episode builds up the immense jealousy and undeserved glory that Fry wished that was his, only to have all the hate and glory that the other Fry had done, was in honor of our Fry. This episode actually had me crying harder than Jurassic Bark and up to this date, is THE episode from THE series that has made me cry this hard.

It’s late at night, it’s overdue, and I have a lot more posts coming up. Sorry folks, but we’re ending this session for now. Thanks for reading.

2 thoughts on “Western Animation: Futurama and The Luck of the Fryrish”