Mixed feelings about this series. It wasn’t bad, but what was it really trying to accomplish other than our little ego filled main trying to be nicer?

(Credits to Wan Abrar for that gif)

So during the preview of last season, I just decided to watch this. With the “SS'” at the end, I thought I missed the first season. I was wrong as it turned out that “SS” meant “Secret Service”. After seeing the preview picture of a prettyboy and a cute girl (GARTERBELTS!) I went “meh” but I thought I would watch it just for the girl. But lo and behold, I ended up watching the entire series, and I will say it was “alright”.

The premise goes as thus: Shirakiin Ririchiyo is a condescending little bitch, but in the inside, she really wants to make friends and stop berating people. Due to this, she moves to an apartment complex known as “Ayakashikan” to seek peace and quiet. The building she moves into however, is not a regular place. The building itself houses the descendents of demons and Ririchiyo meets Miketsukami, a clingy gentlemen who treats her like a goddess. Instead of appreciating those forms of kindness, she constantly questions why he is so nice to her. Oh yeah, Ririchiyo happens to be half demon as well, not too much suprise there. The whole thing with the Secret Service is that in the building complex, the ordinary residents are assigned members of this so-callled Secret Service to protect them. So, the rest of the story goes covering Ririchiyo’s life in her new home and her perseverance to be a nicer person. 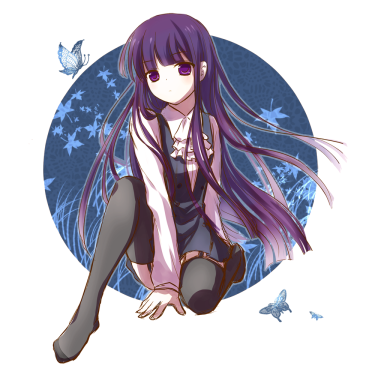 Like most series this season, I went in on this series without any expectations. With that in mind, it wasn’t that hard to enjoy this series. The character diversity was present and the “sense of community” acts as a selling point for me, cause I’m the type of person who enjoys seeing a huge ensemble of (likeable) characters. What I never completely understood was why do they even NEED the S.S agents helping them when most of the cast…actually nevermind. Ririchiyo happens to be the only character who could probably last without her agent.

Episodes go in the format of usually focusing on one character per episode. Either that, or it’s an episode of Ririchiyo and Miketsukami which was the point of the series. I enjoy watching Ririchiyo interact with other…people, mostly because of her attitude of course. Watching her calmly respond and then go into a state of mental drawback from regretting what she said is…painfully adorable. Once again, characters, diversity is a key factor and this show got it done nicely

Overall, the series was nice to watch. All the characters make it a nice, entertaining piece of work.