I’ve got a big post with pictures and a big post of text (related to games of course) planned right now. Short post as I have a few more planned stuff.

So lets this thing started

Last episode, Junich was promptly kidnapped by his cram school so he could study more, leaving Nanasaki alone for their planned date. Sad Nanasaki is sad fanbase.  So while Junichi is studying away, Nanasaki works with her team to manage the school’s festival. They also do a rendition of Shakespeare’s classic, Romeo and Juliet with some more or less correct pronounciations.

I’ve always wondered how Shakespeare’s meter system worked in foreign languages. But if it works in english, it might work for the myriad of asian languages no?

Literary matters aside, back at the cram school, Junichi seems to have finished his work and promptly gets up. After a small scene with Nanasaki, Miya and Sae invites her to spend the night at her house. Nanasaki agrees but leaves to buy a gift for her brother. She finds a toy that jogs a few memories of last year with Junichi. However, Junichi happened to be right behind her. Junichi explains that he had completed his assignment for tonight and he had sneaked out of the facility to spend time with her.

I realized that Rihoko’s arc was easy to review because, the love came at the very end while love permeates the air in this and probably stay like that for the rest of the series. 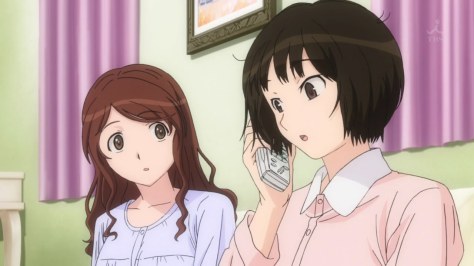 Anyways, the two resume their planned date after calling Miya about the situation. Miya then proceeds to grope Sae, who looks A LOT better with her hair down.

Junichi also buys Nanasaki that coat he eyed in the last episode and he takes hers to wear. While this is happening, Junichi’s best friend notices them and realizes that Junichi had skipped his classes when one of the cram school’s enforcers show up. He decides to stop moping around and try to get a girlfriend as well

I think I’m wrong here but I think Junichi runs into his teacher in a rather “red light” part of town, I dunno correct me cause I’m curious as well. Anyways, his friend shows up and accidentally asks out familiar lady as well.

Both background and Nanasaki look nicee

Anyways, the two end up sharing a moment as snow falls down. They say the stuff we all like to hear with “love” and “forever” being the key words. However, Junichi’s promise of eternity would be unfulfilled as he needs to return to cram school the next day. They later see the fireworks together

A fitting end, not so over the top than last seasons but it still was nice.

Next up is Kaoru’s arc? I was suprised when I saw Kaoru in the preview so I guess Sae’s arc comes later. Which is a big plus for me as Sae is my least favorite.