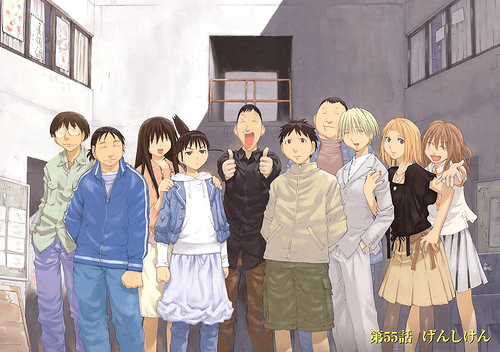 Obvious spoilers ahead, sorry about this

Quite honestly, I have no idea how I got to know this series, there wasn’t anything too special about this series rather, a character that was extremely attractive. I guess that reason told me to go watch this series for the sake of watching otaku’s doing what otaku’s do best, being otaku’s.

NOTE: So I was going to do the first season review but then I literally read through the manga (i loved it) atleast the original 55 chapters and decided to just do the entire damn thing now. So I will concentrate on the first generation of Genshiken

To be frank, I guess the main character is Kanji Sasahara, a freshmen in college who starts looking for clubs in his college. Seeing as though his main hobby or past-time is reading manga, watching anime and stuff, he checks out the anime club and manga club. However, it’s full of fat boys and the typical otaku male and so he is discouraged to join anything for now. While this is going on another “main” character, Makoto Kousaka is looking to join clubs as well along with his childhood friend he reunited with, Saki Kasukabe. Eventually Kousaka joins Gendai Shikaku Bunka Kenkyūkai or Genshiken which translates to “The Society of for the Study of Modern Visual Culture”. Kousaka meets Sasahara and invites him in the clubroom. There he meets his friends who he will spend the next 4-5 years with. But for now, Sasahara is still not confident in admitting he has a penchant for anime, manga, and doujinshi’s. One by one, the club members leave to attend their own business, and when Sasahara is alone, he looks for some doujinshi. He eventually does, but he finds out that this was a test, to see if new members are truly “otaku” material. Sasahara is now the newest member of Genshiken.

After the years of college, the Genshiken spirit would still hold even after graduation. The manga currently is covering their antics even after college, and their relationships and even new members apparently.

I say that I don’t that many relatable connections to a bunch of characters, but I generally like all of them

What I loved about Genshiken was the realistic art and setting and the fact that this anime was made in 2004, and the distinct anime art style pleased my eyes, no idea why. Anyway, Genshiken is just a very…casual series. You could say its like Lucky Star (which I have never watched but if you’re an anime fan and have scoured the internet for a while a few years ago, it was impossible not to hear about it) only without the moe and the cute little highschool girls who look like elementary schoolers. Genshiken’s amount of realism and the nice little setting in the otaku culture is just nice to see. I didn’t really watch it for story, I just watched cause it made sense and I could relate to it. You would understand if you were one of the few guys who understood memes and some games that weren’t just shooters in a school full of kids who only play shooters and don’t really appreciate Japanese subculture (or is it culture?). It’s a series I can simply turn on and watch for the sake of just seeing an anime about guys talking about anime.

After reading the manga to the latest chapter, here are my honest thoughts. I was quite pleased when they gave me the college setting instead of highschool. That added more to the characters when they graduated and got jobs. These guys would still meet after their graduation. They all keep in close contact to eachother. Characters walk into the clubroom and there would be someone there. Everyone gets jobs and lives far off but they still value their friendship for what its worth. I truly respect and admire that friendship, and I really enjoy manga that does that. It’s like Gintama almost. All the characters have a special relationship and you as the reader almost feels the type of atmosphere they have when they are talking, it almost feels like you’re there watching and hearing the characters. The inside jokes and all. I am aware of how a lot of series are like that but something about this series just strikes me and tells me it’s unique. Maybe it is the extremely realistic tone and setting. Characters are believable and the whole thing is relatable to. The characters of course, makes the greatest story. So human, so flawed, so believable

Section below is spoiler but it’s a relationship between two characters, it ain’t a huge spoiler for a series with a story like this but I would rather have you guys read it to truly see it

Feelings that had time to develop are stronger

My favorite characters are Madarame and Saki. Their relationship is so unique and I love the story the two have. In the beginning, Saki being the otaku hater and Madarame the lead otaku in the series, the two have their bouts. Saki thinks Madarame is scum while Madarame thinks Saki is just a “norm” or a “commoner”. They just generally dislike eachother. Around 3/4 of the anime or in the first 20 chapters Madarame finds Saki alone in the club room. He tries to make small talk but she ignores him and he increasingly gets extremely nervous. But then he notices nose hair on Saki and he subtley tries to tell her without getting hit, but eventually gets his anyway. After that, big fire because of Saki smoking, she gets a little nicer towards the crew. Eventually after the members mature a bit and near Madarame’s graduation, Saki and Madarame would meet in public, first time goes bad as Madarame thinks that Saki’s friends would insult her if she was with him and he ignores him. The second time, the two meet once again and then they decide to go eat dinner. It’s a very pleasing and casual scene seeing how far the two have come along in their relationship as friends. Fast foward around 20 chapters when almost everyone has gotten into relationships and jobs. Madarame finds Saki once again alone in the clubroom when he comes to eat lunch one day. It was exactly like that moment 4 years ago when he was alone with her. Only this time they are able to take. Saki mentions that time when Madarame got hit here, but he pretends not to remember. However, he musters up to courage to say….something. Instead of confessing to her, he instead confesses that he is very grateful that she was able to put up with such otakus like himself and his friends for 4 years. Saki upon hearing this starts to cry a little bit, saying that she has been reflecting the past four years before Madarame got here. She returns the favor and thanks Madarame for putting up with her, for the past 4 years. Madarame respects his friend and treasures the friendship they have made, and he is not willing to sacrifice such a friendship by confessing to her. I just love that aspect of the series, some tragic romance that you wouldn’t really expect from a hardcore otaku like Madarame. You can’t help but to cheer him on to find love

To end things off, this is one of the longest reviews I have written, and rightfully so, I think it deserves it. It is probably my favorite manga series that isn’t a series I read a long time ago (i.e: it isn’t exactly new, it isn’t exactly old)

Read it, if you’re like me and just ADORE character interaction (and i guess depth) and relationships then read this manga.

and if I ain’t lazy, I just might talk about the relaunched Genshiken manga that still updates once and a while.